Young men who are admitted to Brophy Prep, a Jesuit high school in Phoenix, are consistently smart and high achievers. Their parents are likely the same, however they haven’t figured out their sons can secure a similar education at no cost in a public school.

There was a public school board candidate forum in Scottsdale on Friday night. Those running for their local governing boards were each given several minutes to share their background and goals if elected. The common objectives expressed by each candidate were an emphasis on returning to traditional academic curriculum and no more agendas like critical race theory and gender identity during class time. These were recurring themes. District after district has lost its way and testing shows it. Creating political activists out of minors is not what K-12 classrooms are for.

So why would Brophy Prep travel down this road? We have been told this isn’t new for Brophy. However, word is getting around; perhaps the parents and students are not feeling alone anymore in craving a traditional curriculum. Recently parents organized in opposition of the experimental, abortion-tainted Covid shot the school was pushing on teenage boys. The principal, Bob Ryan, didn’t seem to care. Instead, the school piled on more Critical Race Theory and shut down the Facebook page due to negative comments.

Lent starts on Wednesday. How is “Catholic” Brophy addressing this solemn liturgical season? By creating more political activists for the Liberal Left, the Party that has united with the Temple of Satan. Here is their summit which is starting on February 28th.

The eight tracks are quite interesting. It’s not that these issues are not important; the Catholic Church has always defended the poor and marginalized. And one of the Church’s most popular saints is St. Francis, the patron saint of the environment. 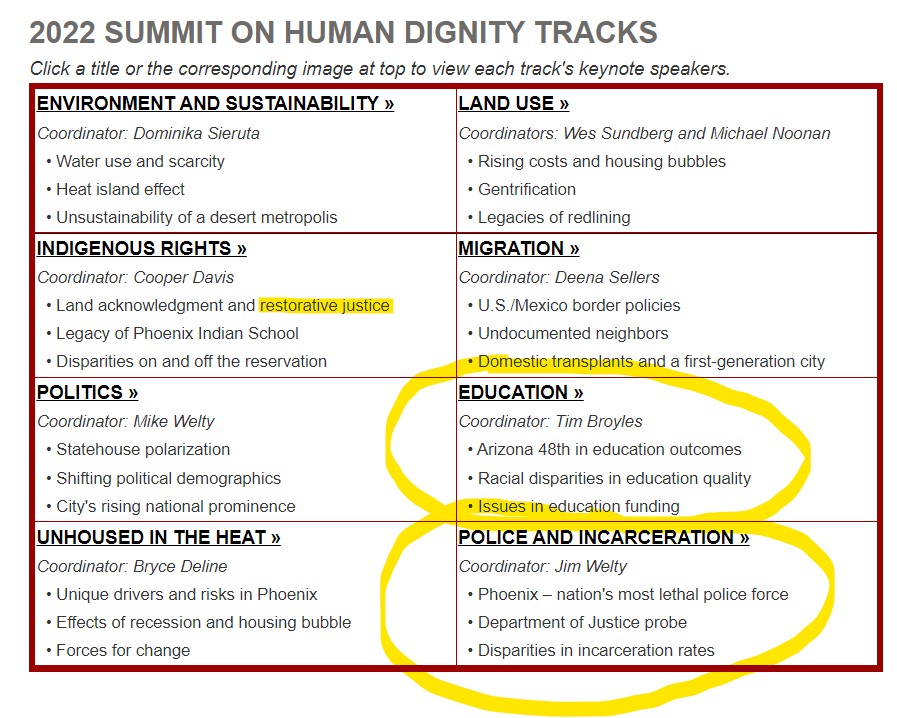 The video put together by students and staff introduces the audience to the school’s bias, planting seeds against Phoenix Police and leaving out key information about education funding in Arizona.

Here is more from Brophy’s website. Notice the attack on Sheriff Joe Arpaio.

Maybe Brophy could invite Sheriff Joe, who is himself a Catholic, to speak during the week to give his perspective on what actually went on during his tenure.

One of the other anti-police speakers is paid by the government (NPR) and the left-wing godless media, which is funded by global organizations.

Brophy didn’t look far to find one of the speakers for the education track. The planners went right to one of the most deficient districts in Arizona, which is controlled by a vast Planned Parenthood network and a superintendent who is trying his best to push parents out of the way for his own political gains.

In case anyone at Brophy isn’t up to speed at what is going on at the Phoenix Union administration building across the street, there is plenty of reading material on this website.

Last year’s summit was titled 2021 Summit on Human Dignity–Challenging Racism. This sounds just like a free public school. How does Brophy Prep squeeze their great academics into the day when liberal social justice agendas are taking the main stage? Are they skipping Catholic teaching? One of last year’s speakers was Ibram X. Kendi who is making a living telling Americans we are racist. Once the racist agenda is allowed in any institution, the LGBTQ agenda follows right behind. (We have been told some are using pronouns at Brophy. If we obtain evidence, we will publish it. Sources always remain anonymous).

There is a bigger piece missing, the main issue for Catholics: There is not one track for this year’s Summit on Human Dignity which addresses life issues–abortion, euthanasia, cloning, or in vitro fertilization. Could it be because Brophy Prep heavily supports the Covid shots, which were developed with aborted babies’ cells? We knew about Johnson and Johnson’s use of aborted cells, but only recently did we learn about Pfizer hiding its use of fetal cells. Or is it because the political activists Brophy is training will conform with Democrat issues, and the Democrat Party has severed itself from God and life?

Ironically, the 40 Days for Life campaign starts this week around the globe. Yes, it’s a global movement, the Brophy hierarchy should like that. This would be a great opportunity to share the importance of life and why the Catholic Church defends EVERY person, no matter the age or status, from conception until natural death. Actually, if Brophy students were taught WHY the Church sees everyone’s dignity as important, some of the injustice tracks in the summit would not be needed. Also, it would be an incredible learning opportunity for those students who attend Brophy who aren’t Catholic. There is an abortion mill not too far from Brophy; 40 Days for Life could likely use some prayer warriors on that sidewalk during this campaign.

Ah, but Brophy Prep is Jesuit. The school is not run by the Diocese of Phoenix, so there is no need to call the Bishop and complain. Jesuits have elevated their own gay sex-crazed “Fr.” James Martin to national prominence. Meanwhile, holy priests who actually teach the Catholic faith are marginalized in some dioceses. The Jesuits have it backwards, but the media loves their message so the order gets away with misguiding youth. If the truth really got out to the masses, the $17,000/year price tag at Brophy and similar schools would be in far less demand and the money flow would dry up. 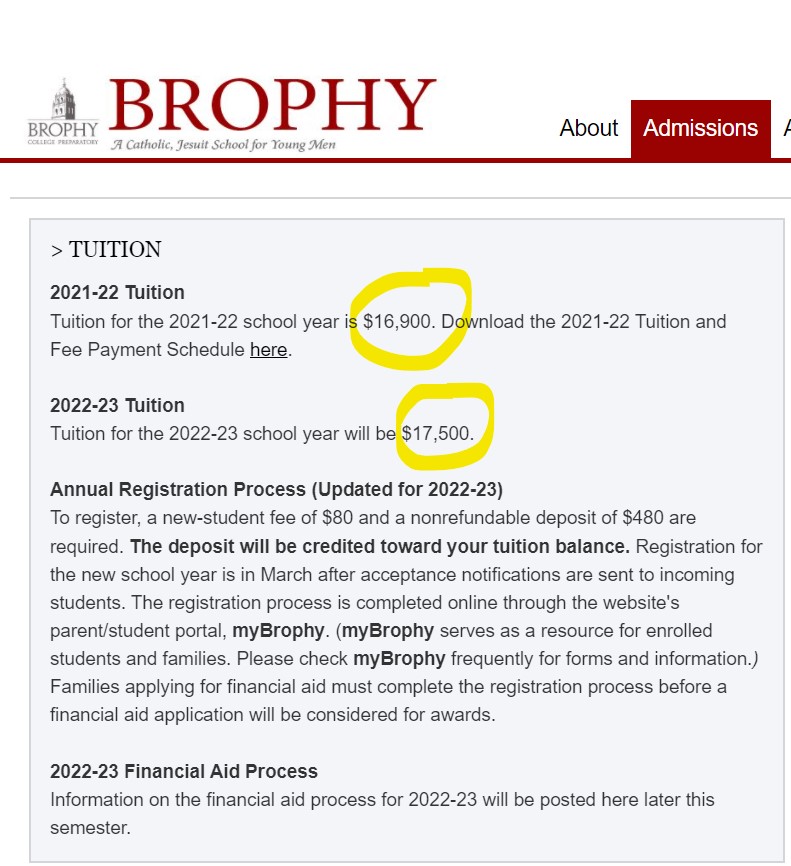