Memo to Parents: Pediatricians No Longer Are Needed, Your School Board Will Handle Kids’ Healthcare

[EAN NOTE: Ever since the Education Action Network Was Formed 12 years ago, we have watched the steady decline of the state of our public school system. All of the "business as usual" methods of reform have been tried and failed.  We are of the opinion that the only way to reform our schools is to take away their power at the root; and that means removing all children from public schools. Children = money. No kids, no money. I don't want to hear any excuses because i have heard them all already ad nauseum.

Either you care about the minds, souls and freedom of your children or you don't. Nothing else has worked. The storm is upon us. If we don't act now, your grandchildren may be the ones reporting you to the authorities for thought crimes against the state. What happens next? I won't insult your intelligence by spelling it out.]

[The following report, from the website "Not In Our Schools", presents evidence for the claims made by the writer. The writer shares this information with the knowledge that exposing the truth in this situation could lead to a malicious, baseless lawsuit. "We have been told to be careful of the governing board president Jann-Michael Greenburg because he has a family member who may sue if Mr. Greenburg gets his feelings hurt."]

by Peggy McClain on November 6, 2021 Not In Our Schools

This site is supposed to be about schools allowing Planned Parenthood and gender identity into the classroom and who supports and pays for these agendas. Everything comes back to abortion, even the ridiculous standards for dealing with minors’ low risk of catching treatable Covid. Few in government talk about Covid prevention, cures, and natural immunity because they are pocketing campaign donations from Pfizer PAC among other pharmaceutical industries.

Let’s start with Scottsdale Unified School District (SUSD). We have been told to be careful of the governing board president Jann-Michael Greenburg because he has a family member who may sue if Mr. Greenburg gets his feelings hurt. SUSD can’t be ignored any longer and Attorney General Merrick Garland kind of cut in line so here goes.

Like most districts in Arizona, for reasons that make no common or scientific sense, Scottsdale Unified required masks in classrooms when they reopened, even on young children who have very little risk of Covid. And like most districts, parents opposed the district mandate and let the governing board know. Honestly, who doesn’t see something wrong with this? 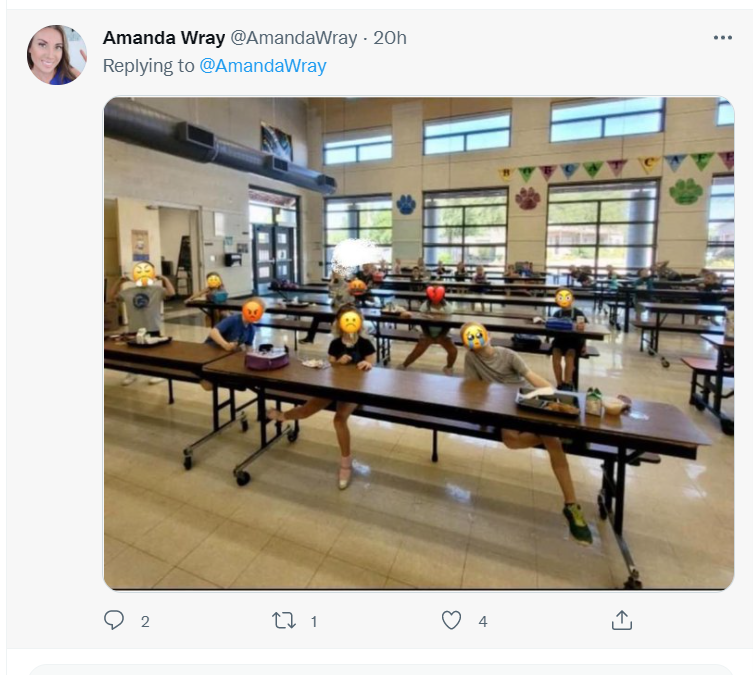 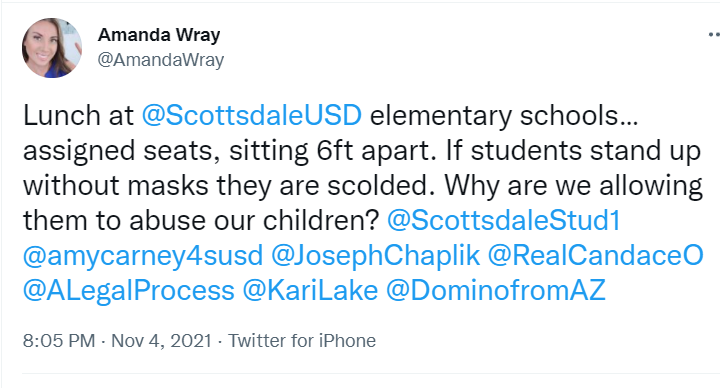 As SUSD students are treated like prisoners, Governing Board President Jann-Michael Greenburg had to get out and get some socialization. Not able to keep up the facade any longer, Greenburg visited a Scottsdale bar, but without a mask or social distancing! There are a couple significant hyperlinks in the linked post from AZ Free News:

We are well into this academic year and the issue of mask mandates in schools has been debated in the courts. Because too many in the Arizona Legislature were lazy, the school districts won and they get to enforce masks. But why would a school district want to muzzle children’s faces, especially when interaction is so important to child development? As we have said before, as Big Education toys with the kids, in comes Social Emotional Learning to “fix” the problem because parents (and Republicans in the Arizona Legislature) don’t realize how dangerous SEL is.

That is not all. The Covid fear has to be continued both for federal funds and future “vaccine” mandates for children. Melissa Tornquist, Support Services Executive Assistant and part-time weather girl is downright giddy the air quality is bad at times in the Phoenix area. Goody, more excuses to mask! 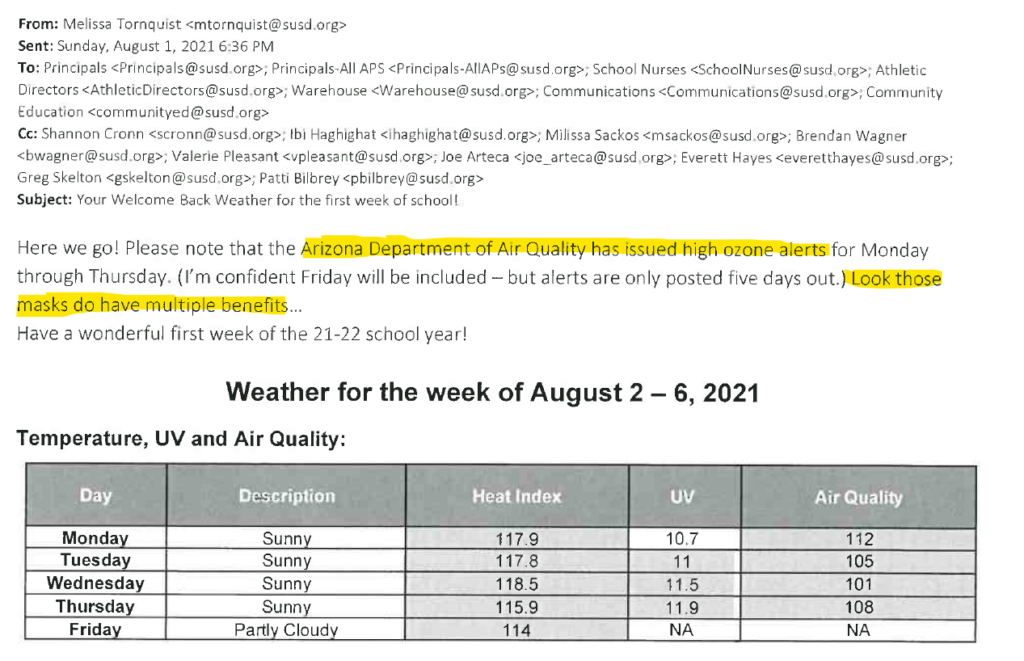 And why not start labeling in elementary schools? Soon the children will need a session with a liberal social worker at school because they were guilted for not wearing a mask and a classmate’s cousin’s aunt in another state got Covid and the maskless child can then be shamed. 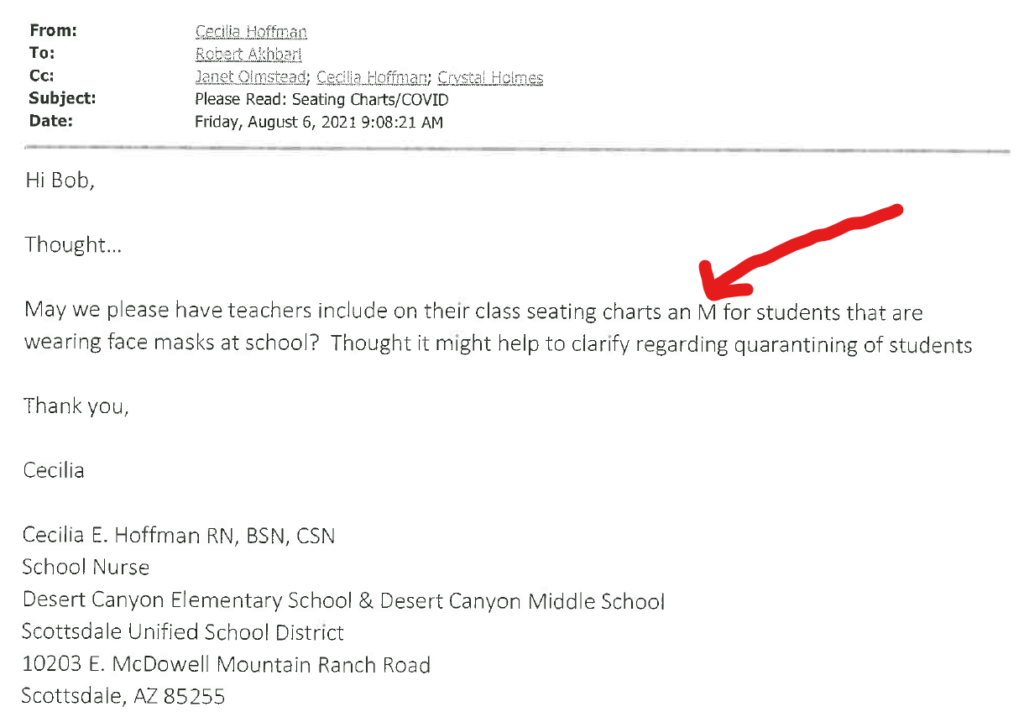 An employee almost needs a degree in Common Core math to make sense of this email. Notice the writer admits the rules keep changing. He or she brings up a good point. It’s kind of like: Can we or can we not celebrate Christmas this year Dr. Anthony (Dog Killer) Fauci? 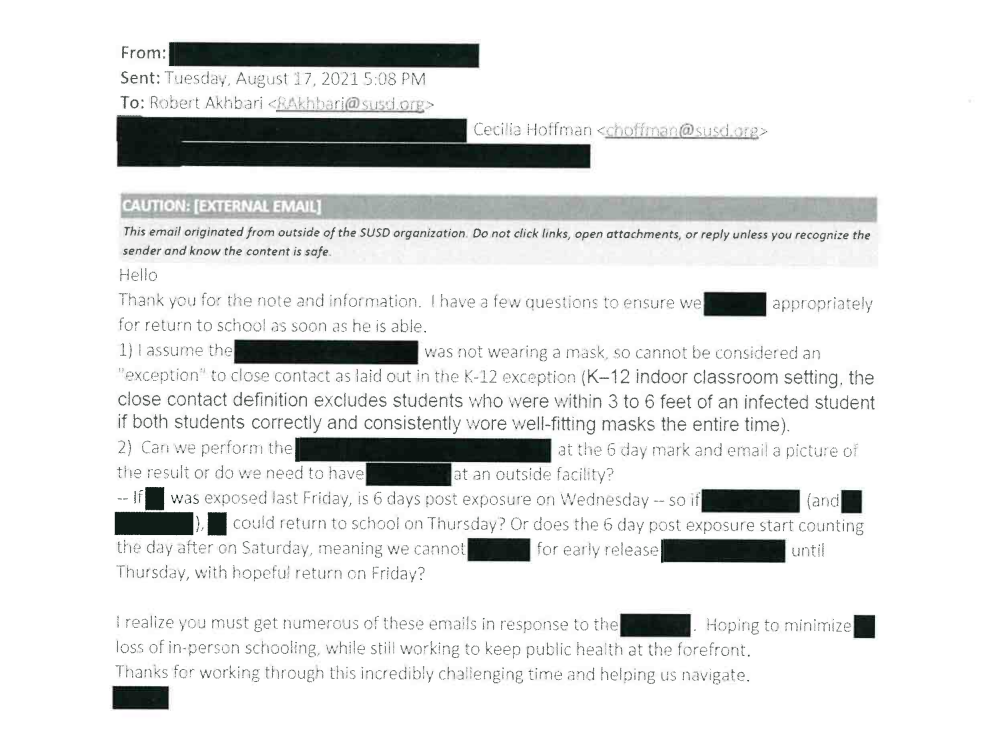 The following email is golden. Look what the ultimate goal is, get all the children jabbed with the Covid innoculations. Then they can go maskless. But is that still the case since this email was written on September 28, 2021? The shot is available for youngsters now, but according to Fry’s Food and Drug’s endless recording, Kroger prefers everyone masked, vaxed or not. See? The rules do keep changing. 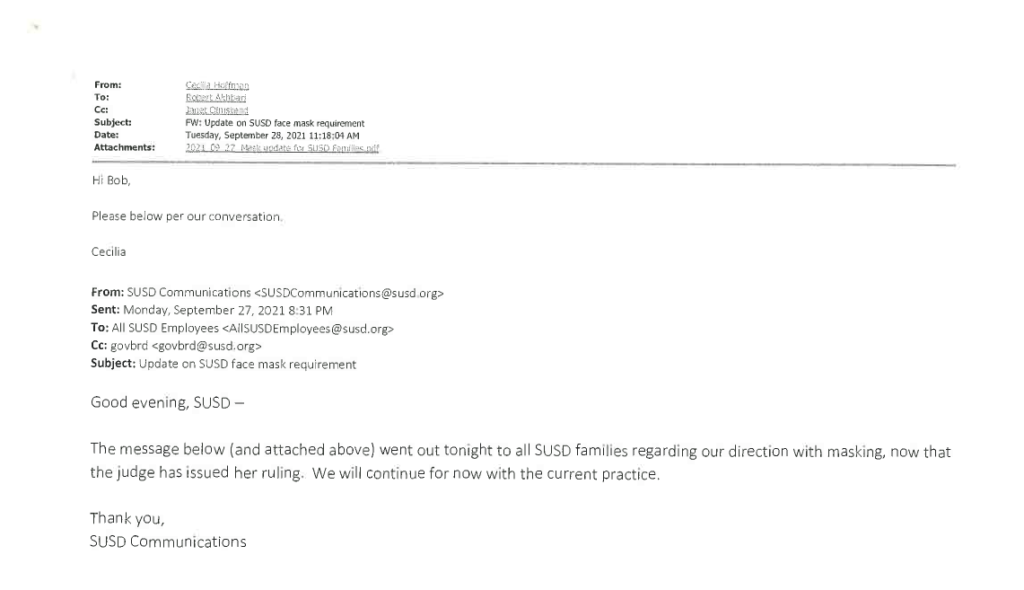 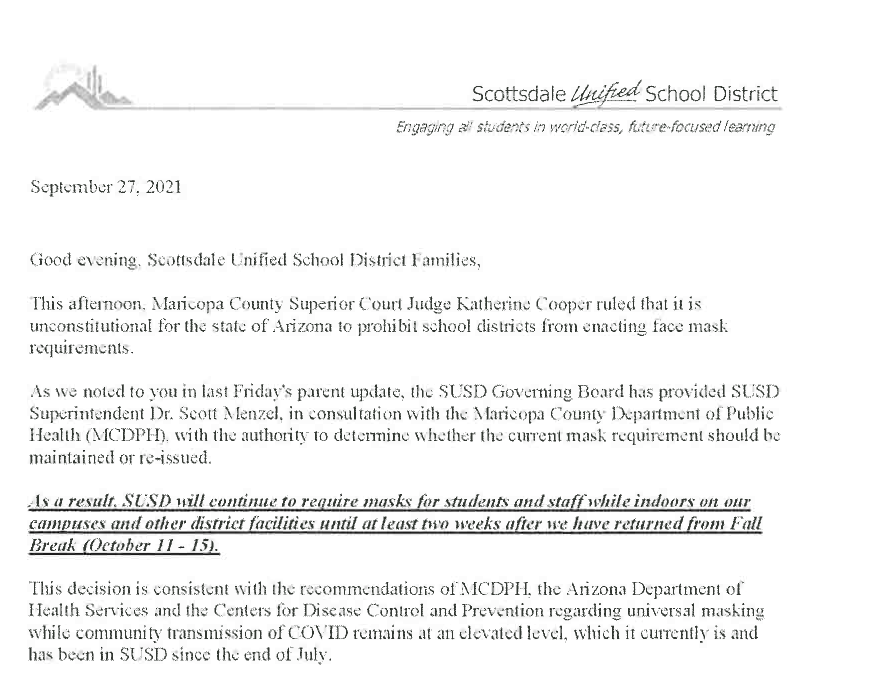 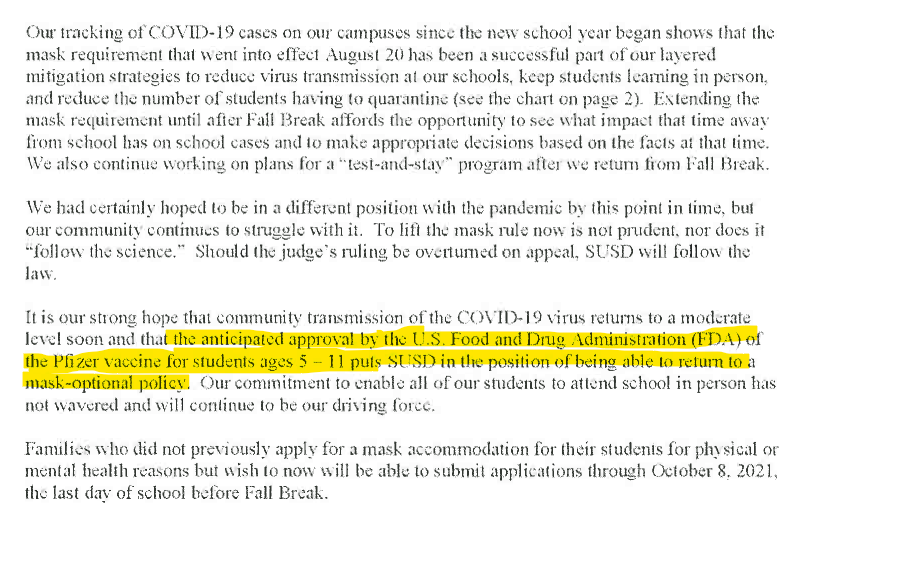 Unfortunately, the shots were developed using aborted baby cells. That goes right up against many folks’ morals. So here we go, abortion rears its ugly head everywhere. First we were told only Johnson and Johnson used baby cells in the shots. However, just recently Project Veritas released a video interview of a Pfizer employee which raised concerns. This gigantic company may have used baby cells in their innoculation according to the whistleblower.

Pfizer Whistleblower Leaks Execs Emails: ‘We Want to Avoid Having I...

When a senior Pfizer employee was asked about this, she couldn’t run away fast enough.

Maybe Vanessa Gelman can be hired as a track coach in Scottsdale Schools if she wants to get away from the Washington, DC rat race.

As we said in the opening, abortion is everywhere. Shame on us for not standing against abortion-tainted vaccines long ago. But now we know and can make ethical and spiritually healthy decisions moving forward.

Will Scottsdale mandate the abortion-tainted shots? Look at this email before the Covid jab was available for five year olds. 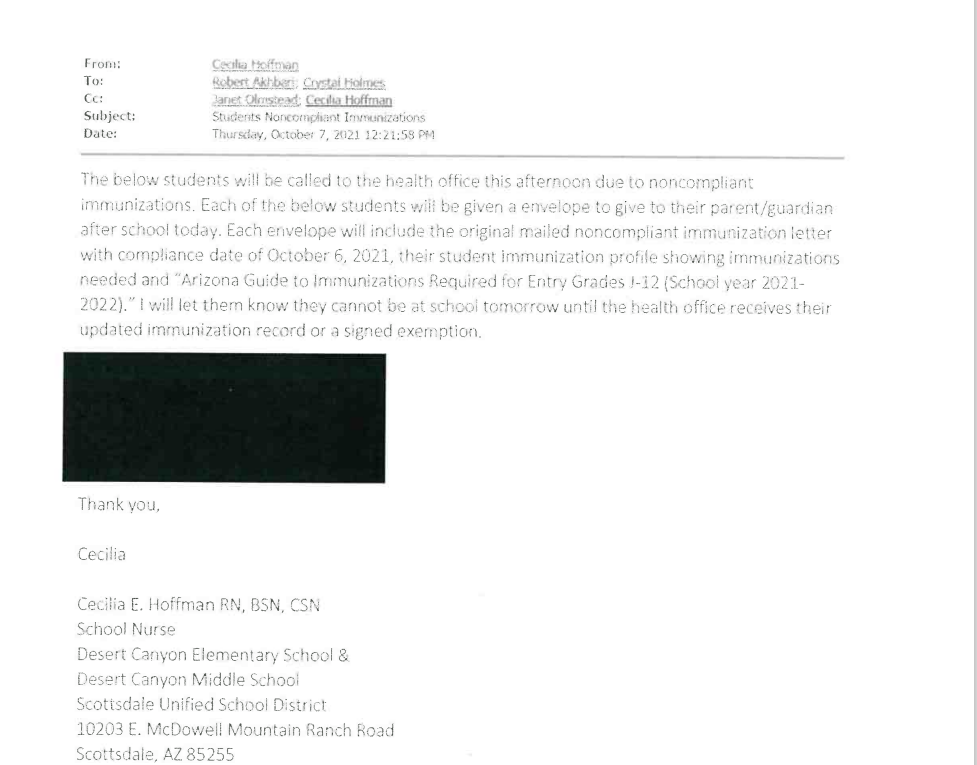 Will the district allow exemptions for children and staff? If so, will those with exemptions be segregated or labeled? Will the Governing Board President criticize those Christians who ask for exemptions like he criticized Christians on an open mic recently?

Look what just happened in once constitutional Gilbert, Arizona.

How long before Jann-Michael Greenburg and the rest of the Scottsdale Governing Board pull this stunt? Watch for these patterns. If a child is lucky enough to avoid Planned Parenthood, the dark forces in Big Education (supported by Planned Parenthood) will go after the children and destroy them one way or another.