by Peggy McClain on November 7, 2021 Not In Our Schools

In our last post we discussed the liberal, Planned Parenthood-trained Big Education bureaucrats’ joy of taking our kids from us under any guise they can think of and have the media peddle the process for them. There is no greater example of this than Phoenix Union High School District’s (PUHSD) Chad Gestson. Not only did he lay his cards on the table Thursday night, his governing board (who hires or fires him) either agreed or remained silent.

Superintendent Gestson was part of the small group we met with in 2017 who did not allow us to review the sex ed curriculum. He did such a good job deceiving that he got a promotion to Superintendent. Little did we know with that promotion he would establish a way to completely remove parental rights and responsibility. All one has to do is enroll your child in Phoenix Union High School District. It doesn’t matter where the child’s residence is, in the district or not, legally in the United States or not. Just get them matriculated in one of those buildings and parents, you can wash your hands and take up a hobby or something because Chad is in charge now!

Not only does Superintendent Gestson take over parenting, he does it while auditioning for a role in the White House! He’s a busy guy, we will round out his resume later in this post.

So just what happened Thursday night? Near the end of the meeting, Superintendent Gestson gave a thorough update on the district’s current Covid status and protocols. It was tough to hide how elated he was at the Arizona Supreme Court’s decision allowing school districts to mandate masks. That is a good thing for Gestson because based on the board meeting video, he cannot make it through an hour without touching his mask, pulling it up and down endlessly so when he talks his germs can spread everywhere, securing it on his nose so he can pull it off right away, and finally touching his nose and then his mask so he can then spread all the germs from his non-sanitary mask everywhere he goes after the meeting. But don’t let any of the public attend the meeting because they might spread Covid even though the Elitist board members are hiding behind plexiglass like bank tellers and are likely fully vaxxed.

As the Superintendent’s report neared the end, he explained PUHSD was planning to stop all its vaccination sites in October but now they will continue into December. (See St. Simon and Jude Cathedral? The vaccination vacuumwas being filled, you didn’t need to step in.) 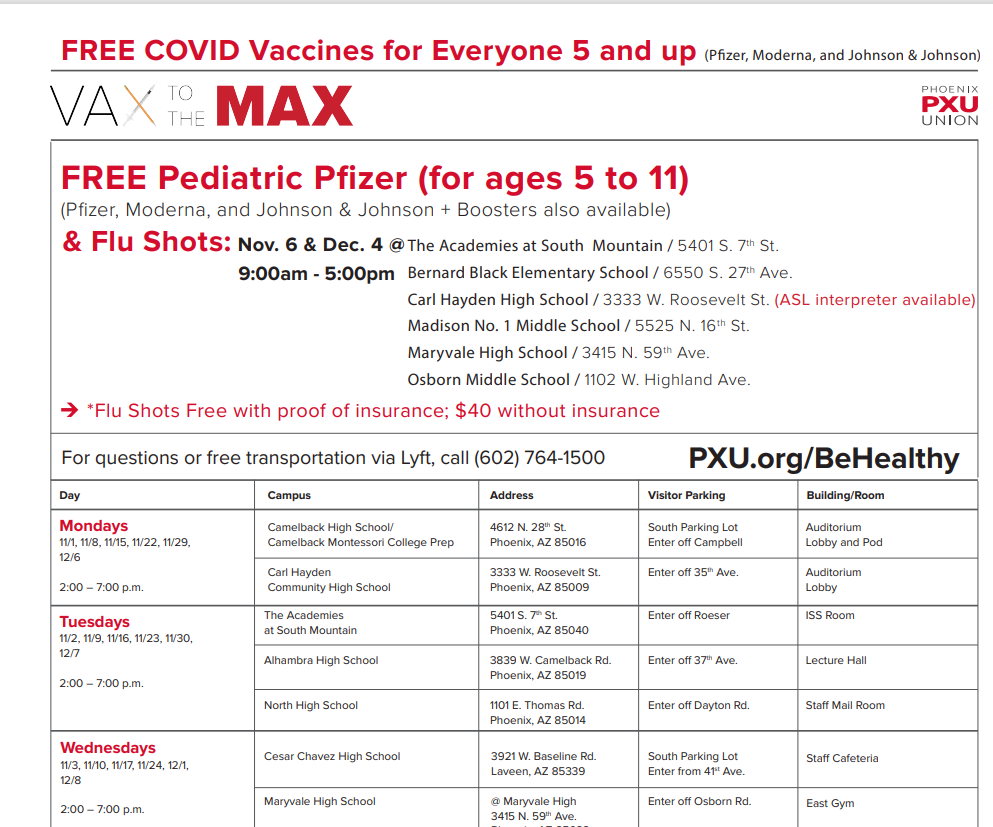 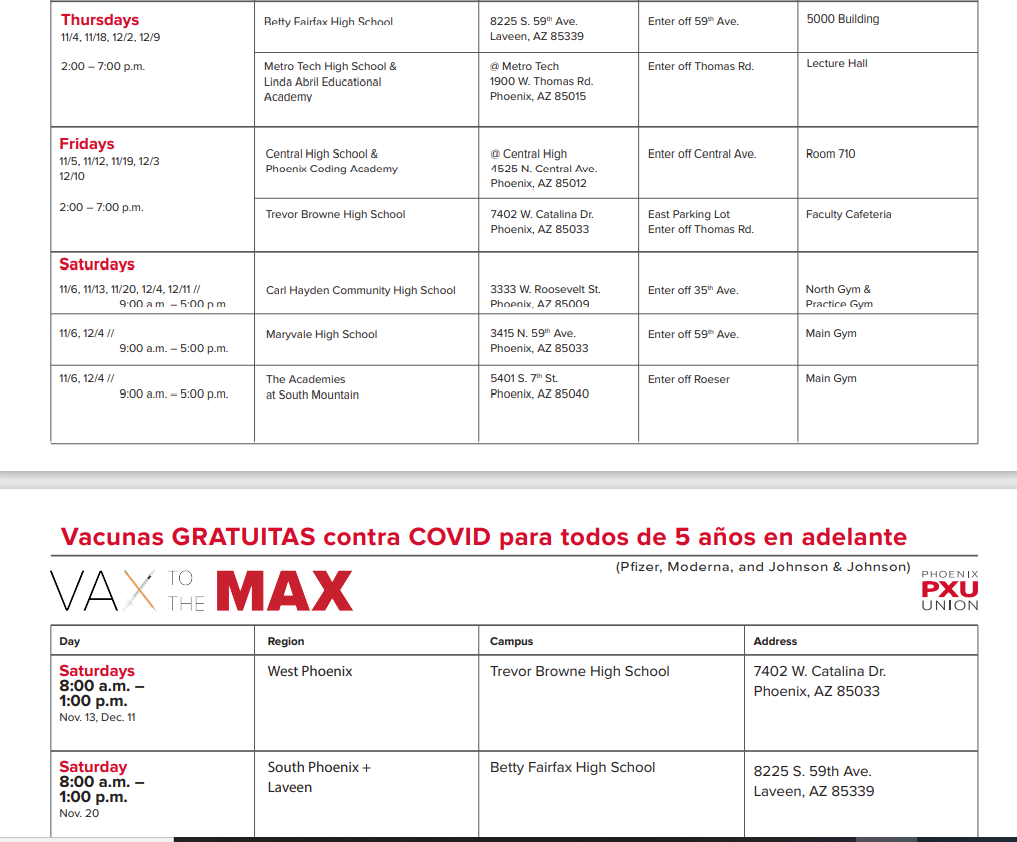 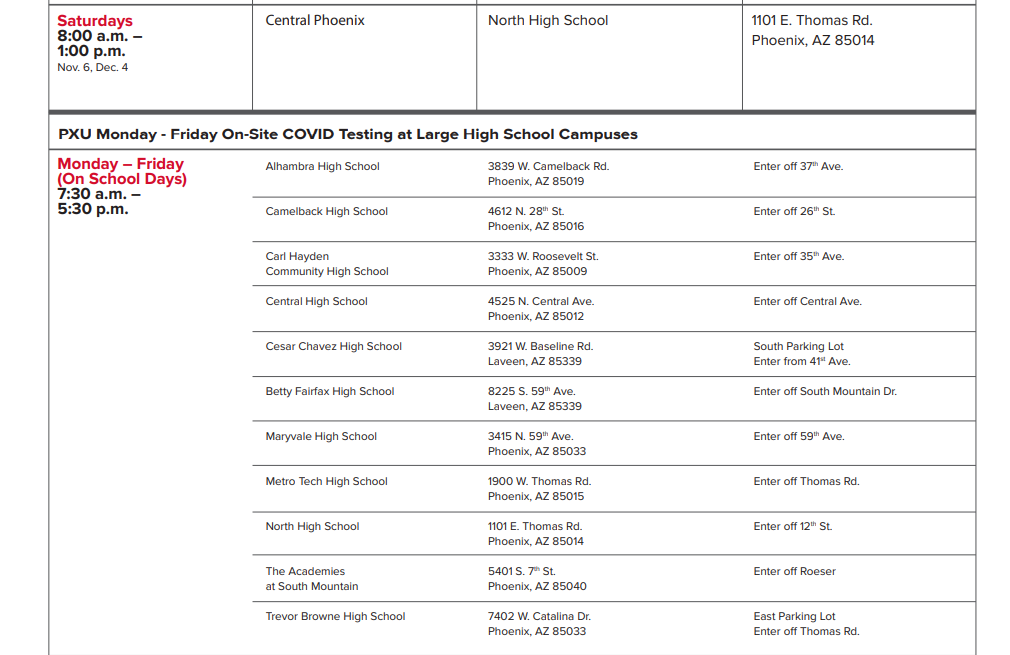 Since when does a school district cross over to healthcare? And why flu shots, didn’t that virus pretty much disappear last year? Why 5-11 year olds, they aren’t old enough for Phoenix Union HIGH SCHOOL district. Word on the ground is PUHSD would like to establish a “Wellness Coordinator” at each school. Do you see a pattern yet? What kind of wellness? Mental, physical, emotional? We predict all of the above. Mom and Dad, there is a reason schools are loading up with liberal social workers who will be using the Arizona Legislature’s Social Emotional Learning law, SB1376, to fill your child’s head with all kinds of thoughts and agendas you never considered. We aren’t talking about Louden County, Virginia, we are talking about Phoenix. What will be next in these school-based health establishments? Birth control, the morning after pill, and abortion referral. Mesa High School has a Planned Parenthood across the street, how convenient. Why not bring Planned Parenthood right into the Phoenix Union High Schools? It’s already being done in Los Angeles. That will be convenient when the wellness coordinator in conjunction with the social worker decide your child should be given trans hormones as Planned Parenthood is tackling that business, also. It hasn’t come to Arizona yet, but if the need is there Planned Parenthood will be your child’s go-to clinic.

Superintendent Gestson is auditioning for something in the Biden administration. He bragged about getting another call from the White House and that the White House wants to support Phoenix Union with their Vax to the Max game. 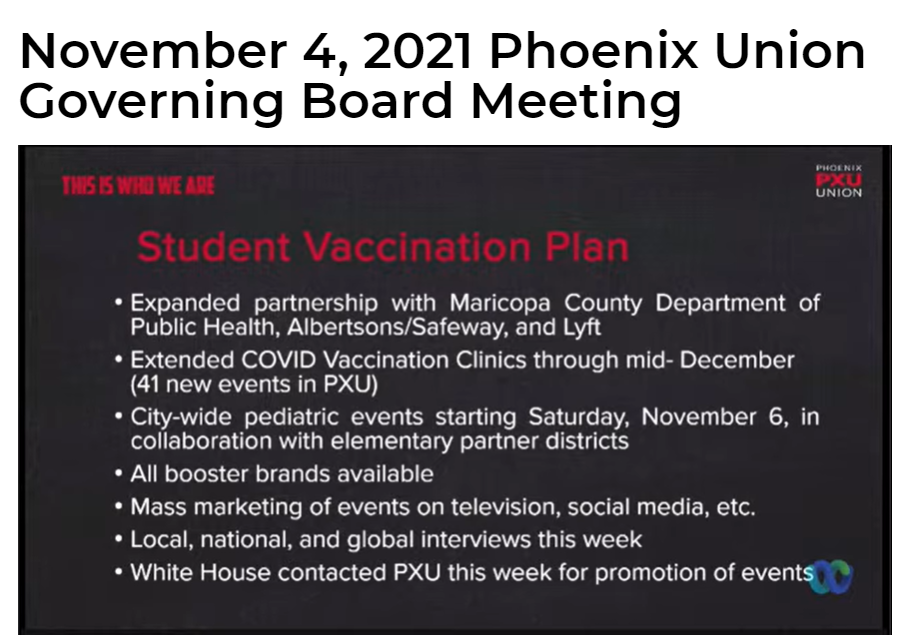 It would be Christmas in November (can we say the word Christmas around a public school?) if Fake Catholic Joe Biden could assist with student trans hormones and abortion to boot.

How does Superintendent Gestson have time for it all with the numerous fights on PUHSD campuses, the lack of proper security during lunchtime, and overflow classrooms due to illegals? He deserves a raise!

But the highlight of the school board meeting on November 4th was the Superintendent’s frustration with parents who actually want to take the starring role of parenting away from Gestson and the district. Listen here:

Let’s understand the Superintendent’s statement. Does this mean if many 12-18 year olds want to smoke and their parents discourage it Chad Gestson can intervene and override the parents? What about drinking? Sex? Marijuana–it’s legal, isn’t it? Birth control? What if a student is pregnant, does Gestson or his staff advise what to do? What about if a child doesn’t want to attend church any longer but the parents insist? Does Gestson position himself in between them? Where did he get the authority to parent someone else’s child from Arizona State Statutes?

What may be worse is Superintendent Gestson’s governing board never challenged him. In fact, Board Member Steve Gallardo was equally concerned about those pesky parents (known as domestic terrorist in some circles):

Mr. Gallardo’s audio was more difficult to hear. Just a head’s up, Gallardo is also a member of the Maricopa County Board of Supervisors, he has to keep the Covid saga going. Yes, Supervisor Gallardo, it is the information about the vaccine that is causing many parents to be hesitant. We can’t help you if your only source of information is media that is funded by Big Pharma. Regardless, the children do not belong to Steve Gallardo, either. How cocky of him to belittle those who entrust their children to him.

Does Phoenix Union administration even focus on academics anymore? Parents, God gave those children to YOU, not to any school district. (Can we say God around a public school?)

Memo to Parents: Pediatricians No Longer Are Needed, Your School Bo...
Parents vs. Everyone Else
SOURCE:
https://www.notinourschools.net/phoenix-union-superintendent-positi...

There's no question our children are in great danger in our Nazi-run government schools.  This surpasses child abuse, These oligarchs have become god-like that they believe in their own insane power.  We can remove our children, that needs to be done,  but only to be replaced by illegals,  which is another problem facing our broken system.

There's no question our children are in great danger in our Nazi-run government schools.  This surpasses child abuse, These oligarchs have become god-like that they believe in their own insane power.  We can remove our children, that needs to be done,  but only to be replaced by illegals,  which is another problem facing our broken system.