Who is Pulling the Strings in Paradise Valley?

Recently another Arizona school district has made the news, and not for anything good. Horizon High School, located in the Paradise Valley Unified School District (PVUSD), made a major faux pas when a teacher assigned a book for English class which contained obscene material, according to Arizona Independent News Network. 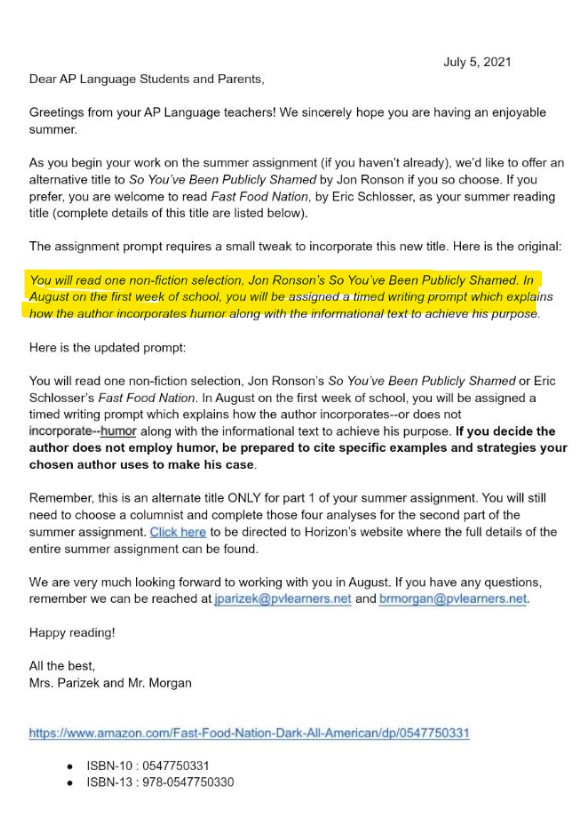 This possibly illegal action occurred due to a dust-up which began a year ago. Last year a book called “How to Read Literature Like a College Professor” was assigned to students even though it was not on the approved list. Parents complained about graphic and sensitive material at the time and Dr. Dan Courson, Assistant Superintendent of Curriculum and Instruction, promised no books would be used by the department which weren’t on the approved list. This year another book with obscene content, “So You Have Been Publicly Shamed”, somehow slipped through the cracks. On November 22, 2021, Superintendent Troy Bales placed Horizon’s principal, Ms. Linda Ihnat, on leave. This message came from Paradise Valley’s Human Resource Director: 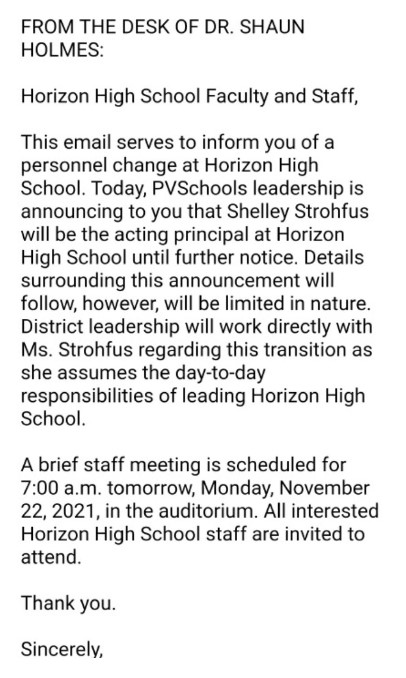 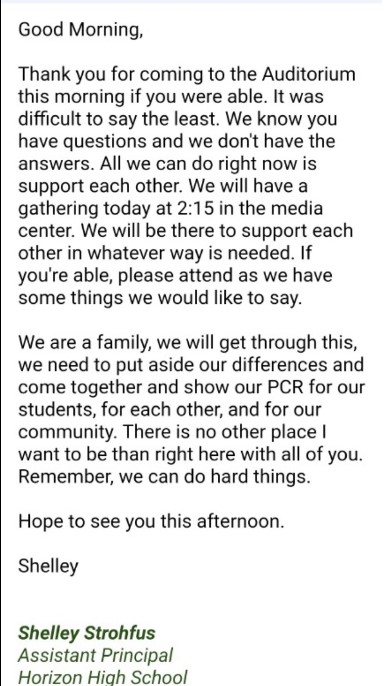 There are a few problems behind the scenes which PVUSD is not owning up to. There is an “outside” group called the United Parent Council (UPC) which is supposed to be an organization to benefit the PVUSD community. Instead, this group is a shadow governing board, making decisions without having to follow the same protocols as a duly elected school board.

The above description sounds good, kind of like those flowery mission statements businesses come up with but often don’t accomplish. It would be wonderful if parents worked together, but it turns out UPC works behind the scenes to push agenda after agenda, while many parents go on about their business thinking the group is making fruitful decisons for the students. Like many local school districts and city councils, Covid was used as an excuse to make UPC’s meetings virtual, which is a ploy to extend the facade. Additionally, during the online meetings the UPC executive team shuts down the online chat and handpicks certain questions for the speakers.

The screenshot below describes UPC’s organization. Jessica Wani is one of the leaders of the group. 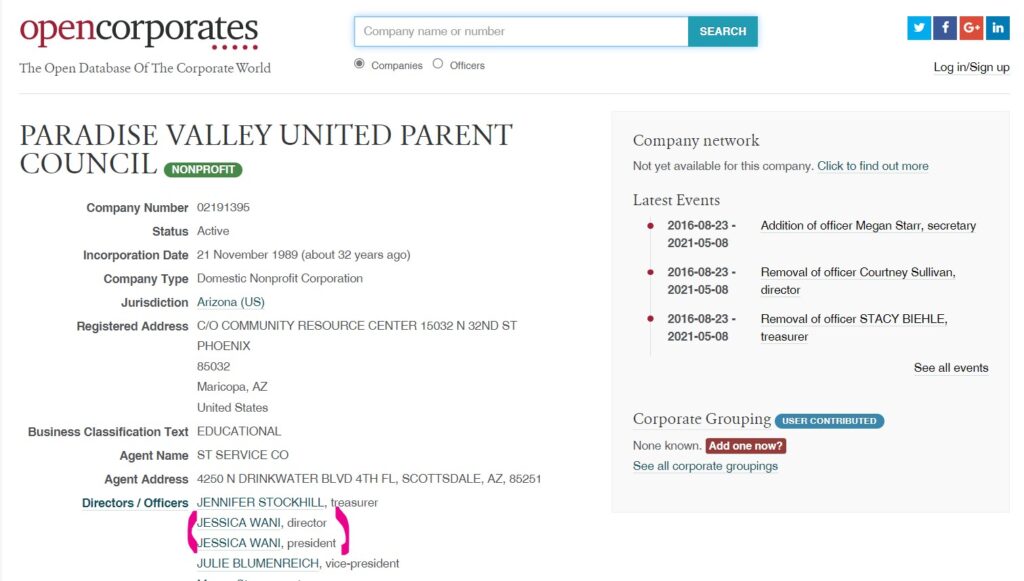 Ms. Wani is no longer the President of UPC, but she has an influencial role as outreach chair now. Based on Ms. Wani’s twitter feed, she implies folks in the Peoria School District should not vote for candidates who favor academics over agendas. And she aligns with the Arizona School Board Association, the same association which markets Race Theory, White hate, LGBTQ, masks on kids, and virtual learning for Arizona’s students. 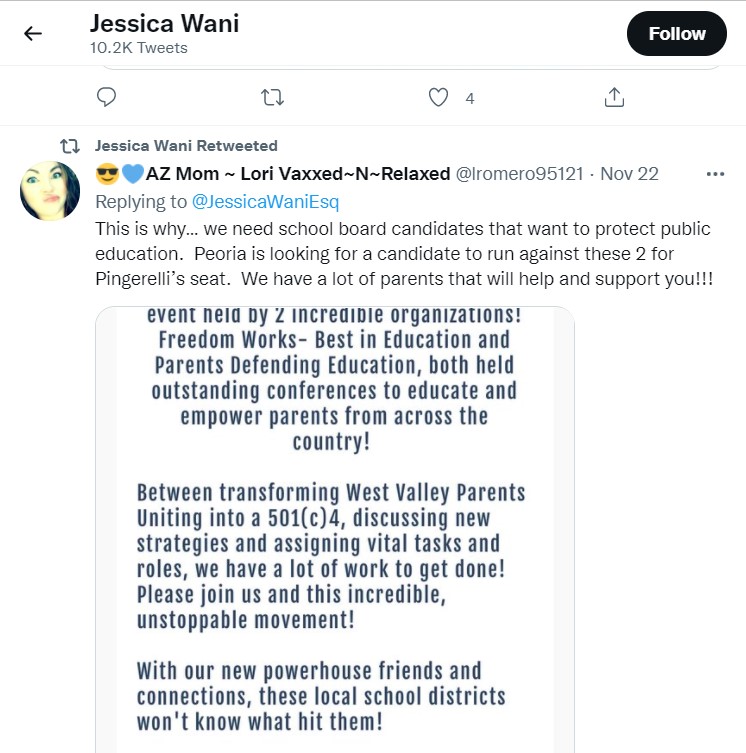 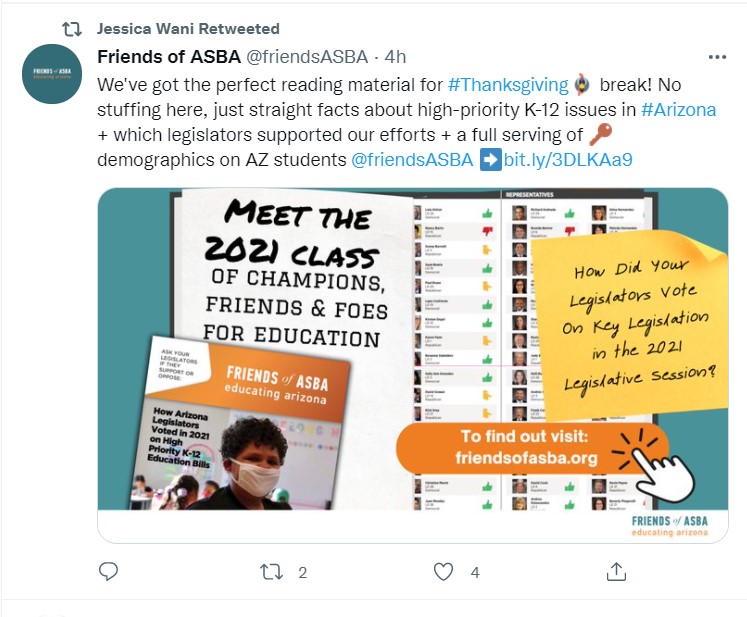 United Parent Council is a progressive body which pushes Critical Race Theory and other “inclusive” agendas. They try to silence opposing viewpoints by recycling the same leadership and limiting who serves on their committees, listed below. 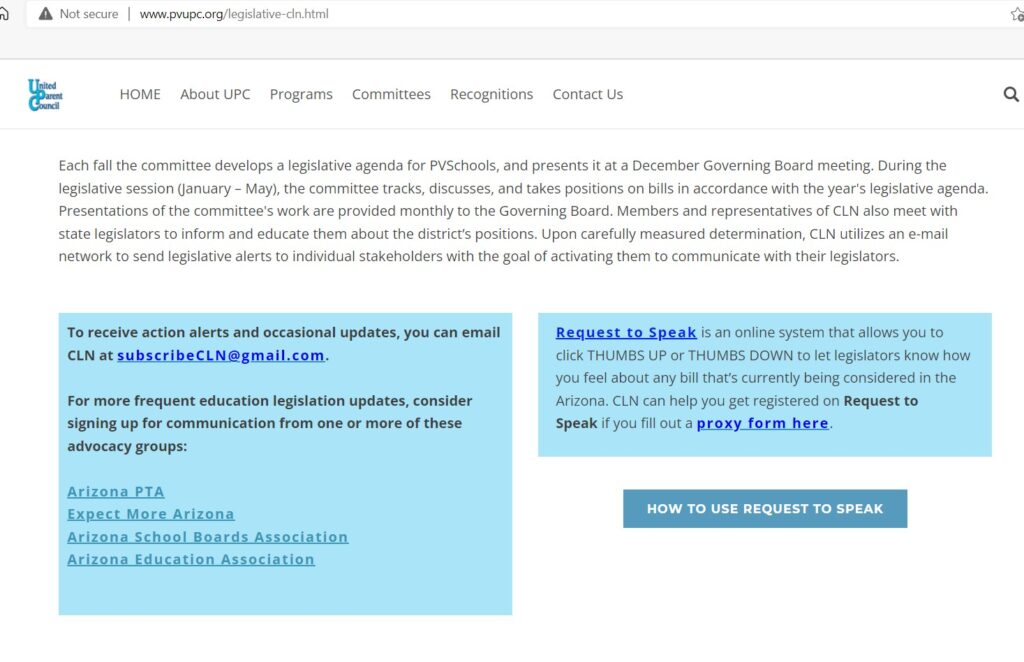 The PTA at one time was a useful organization for the school environment, but recently it carries the water for the needy educators. Expect More Arizona is, well, an organization to “expect more” of the same in Arizona. Clicking on Expect More Arizona sends the reader to Education Forward Arizona. It kind of sounds like MSNBC’s “Lean Forward” moniker. Here is the team Education Forward Arizona advertises. 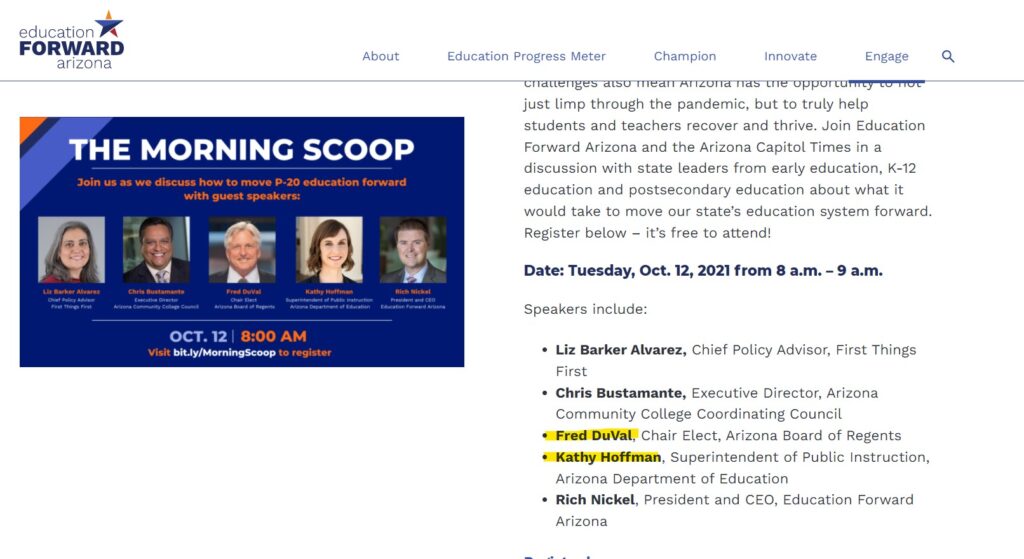 Fred DuVal is currently serving his second term on the Arizona Board of Regents. He was appointed by the man who beat him for the governor’s seat in 2014, none other than globalist Doug Ducey. Politics makes strange bedfellows. Kathy Hoffman is well-known for her total incompetence at the helm of the Arizona Department of Education. Basically the only thing she has accomplished is a myriad of LGBTQ, Inclusive, Diversity, Race Theory, and Safe Space Studies. This is who United Parent Council is using to propagandize those in the Paradise Valley Unified School District.

One of the parents on UPC who has some pull is Melissa Schwartz. Based on her social media postings, she is a Red 4 Ed supporter. 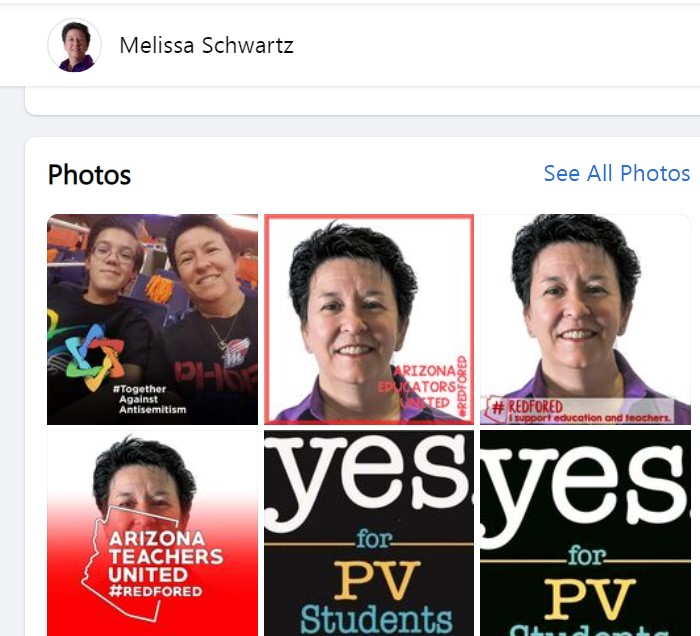 And more propaganda for the kids, some as young as five years old:

Paradise Valley United Parent Council often has speakers at their virtual meetings. Here is a meeting from last year which hosted a Social Emotional Learning speaker. We inserted a screenshot in case UPC cancels the video. 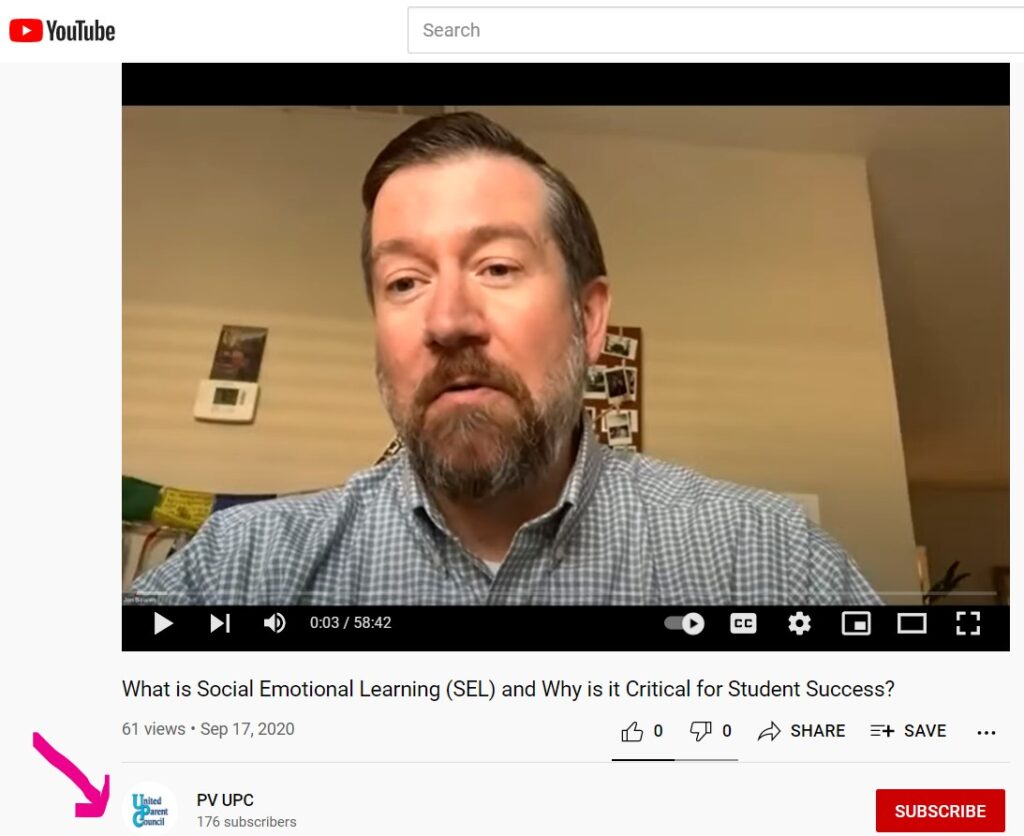 Governor Doug Ducey and the Republican Arizona Legislature gave the district the green light to wreck the education of Paradise Valley students, cementing what PVUSD had already begun. The equity nobody is talking about is the fact that most Arizona school districts are all equally bad for educating kids.

Arizona Pro-Life Leader Secured $1.5 Million, Some of Which May Fee...
SOURCE:
https://www.notinourschools.net/who-is-pulling-the-strings-in-parad...