The evasiveness and confusion coordinated by the Cave Creek Unified School’s administration worked to the advantage of the ACLU and Arizona’s new Superintendent of Public Sex Instruction. The governing board debated, agreed to some amendments, and passed a nifty sex ed curriculum for kids to enjoy by a score of 3-2. It’s worth noting that one no vote was because Board President Kathryn Hill disapproved of the amendments. Ms. Hill is up for reelection next year.

The last time Cave Creek “formally rewrote their sex ed curriculum” in 2002 it was a long, slow process. While the sex ed committee convened last year, Sex Curriculum Director Cara Herkamp clearly rushed the vote this Spring. Why? It turns out the district will squeeze in sex ed for 4th and 5th graders before the school year ends next week. It must be very important material that those students will take into summer vacation. Maybe the new material will peak their interest and keep them reading over the summer. We used the term “formally rewrote the curriculum” because Ms. Herkamp admitted in April that there were changes made to the sex ed curriculum in the last few years without Governing Board approval. Cave Creek’s Governing Board also did not follow proper parliamentary procedure at Monday’s meeting. As stated previously, there were amendments proposed by board member James Rich. Ultimately, the amendments were approved as part of the motion to approve the curriculum. Proper procedure calls for a vote on the amendments followed by the motion to approve the new sex ed. Ironically, it is the Superintendent of Cave Creek Schools herself, Dr. Debbi Burdick, who serves as the parliamentarian. What could go wrong?

Who cares about following guidelines? The children will be taught incorrectly that biological girls can be boys and visa versa. Kids, don’t challenge that scenario based genetics and DNA lessons you are learning in school. Those who do might be sent to sensitivity training and will be labeled a religious homophobic by the district (per the new curriculum).

This current Board has stepped in it. Soon the ACLU and its pal who has disrupted Great Hearts Academyin Phoenix will be demanding special bathroom privileges, boys competing on girls high school teams, and then locker rooms for boys and girls together. Cave Creek is already dealing with the fallout of sexual indiscretion by an employee. Principal Matthew Shenk, who was a member of the sex ed committee, was arrested on sexual charges and abuse as he tried to flee to China. The Governing Board erased his name from the committee and approved the curriculum he helped write. Why ask for more problems like these?

After the dust settled, Phoenix’s largest print newspaper’s on-line division decided to report the Cave Creek results. Additionally, the reporter used the opportunity to disparage this website and parents who prefer tradition and medical science as the basis for sex ed curriculum. She referred to Cave Creek’s actions as “modernizing” its sex ed curriculum. So teaching curriculum that is not medically accurate is modernizing? 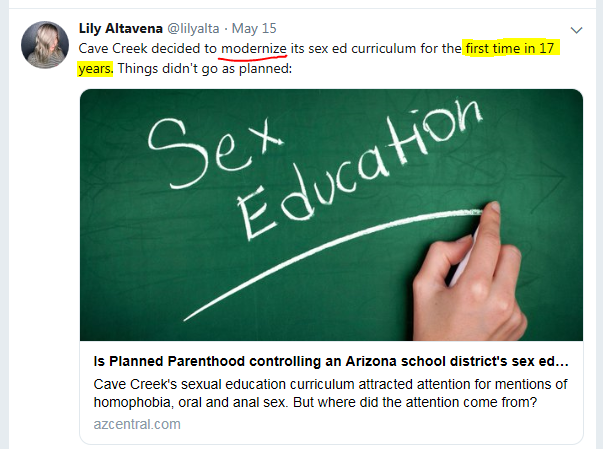 What is it about sex that has changed over the years that would require updates? It can only be an agenda that has changed. And as noted previously, Cave Creek did change their curriculum between 2002 and 2019, they just didn’t request governing board approval. That may be a story in itself.

The reporter could have also shared with readers that Cave Creek Unified has a $2 million structural deficit and declining enrollment. How will the modern sex ed lessons solve either of those problems? Here is another lead for a story AZCentral: Who really thinks teaching a radical curriculum to children, hiding the material from parents, rushing the sex ed vote, and listing Planned Parenthood and Advocates for Youth as “resources” will drive families to enroll in Cave Creek Schools?

What really happened is AZCentral was late to the party and got wind that many parents were not happy with the direction Cave Creek was going. How did that happen? “News” outlets like AZCentral are not used to the traditional values crowd making waves and the same goes with school districts. This time social media played a big part, bigger than traditional media. (You know, modern media as opposed to the old, stale mainstream media.) For this reason, it was AZCentral’s job not only to come to Cave Creek Unified’s defense, but to belittle this website in the process.

The reporter made the story about us instead of the facts. She didn’t even write our name correctly. Maybe she didn’t want people to click on us and find out what is really being done to their little darlings under the guise of “sex ed.” Here is AZCentral’s article, but we inserted some facts they left out. 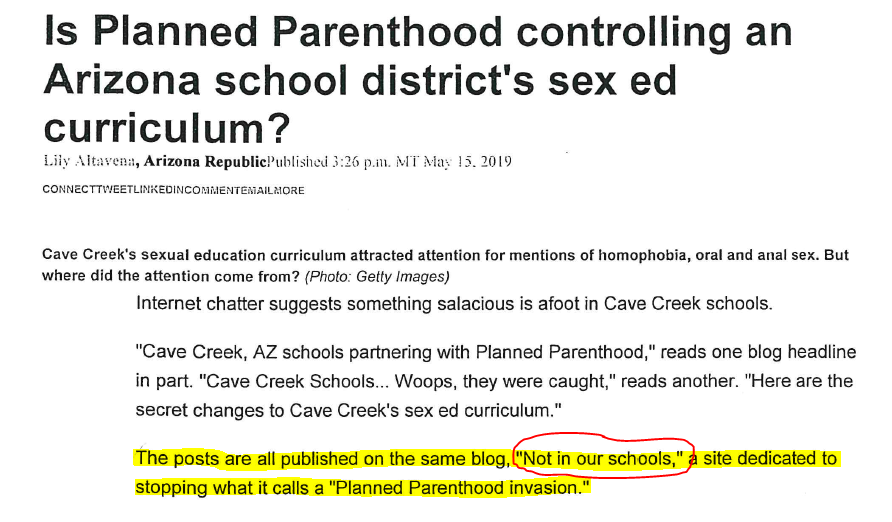 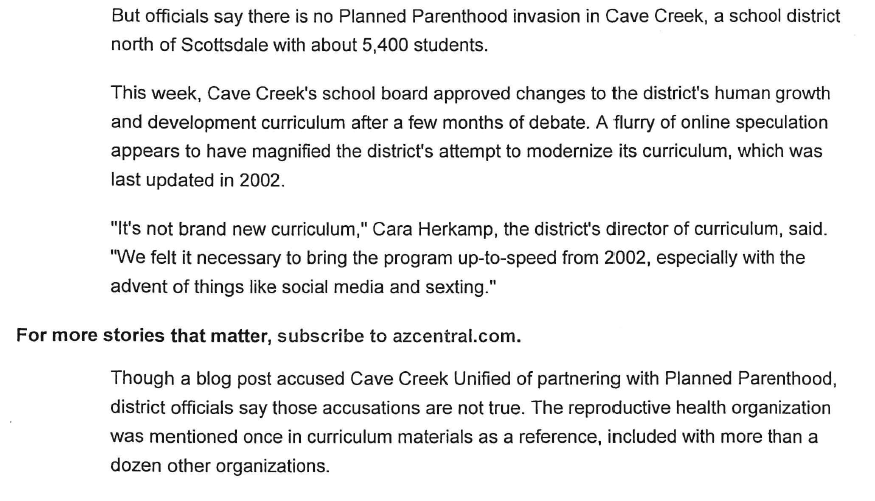 Why would Cave Creek’s curriculum director list Planned Parenthood and Advocates for Youth if there was no relationship with them? Could it be that pressure from Cave Creek parents through modern social media drove the Governing Board to finally remove the list of resources which included the abortion mill and its offshoot, Advocates for Youth? 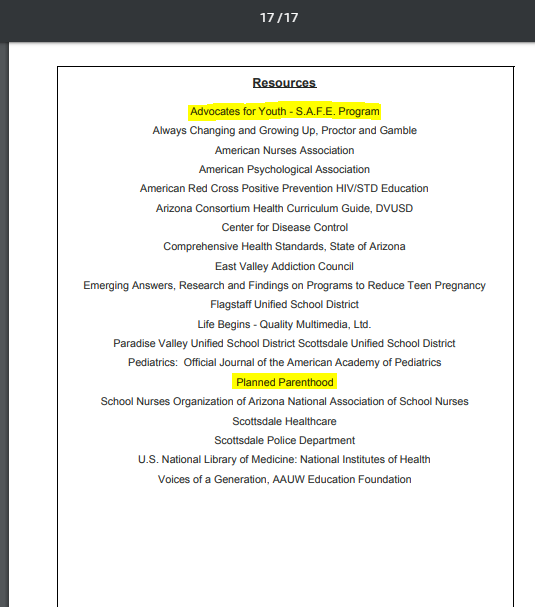 It should be noted Tempe Union High Schools made the same claim then their teachers manual was found to have references to Planned Parenthood despite their denials. 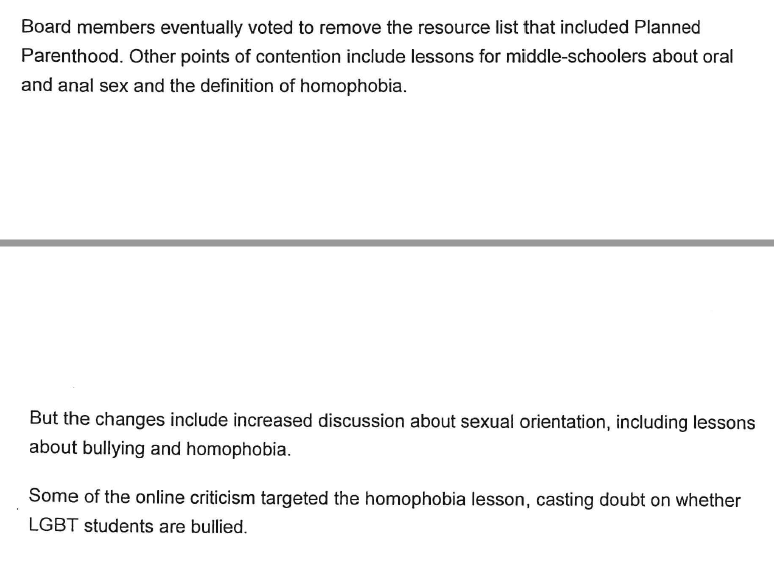 We will continue to cast doubt on the repetitive claim that LGBTQ kids are bullied for being LGBTQ (most kids are bullied at some point during their school years unfortunately) until the complicit media gives us dates and campuses where these situations are supposedly occurring. Shame on the media for not bringing these events to the public if they are true. 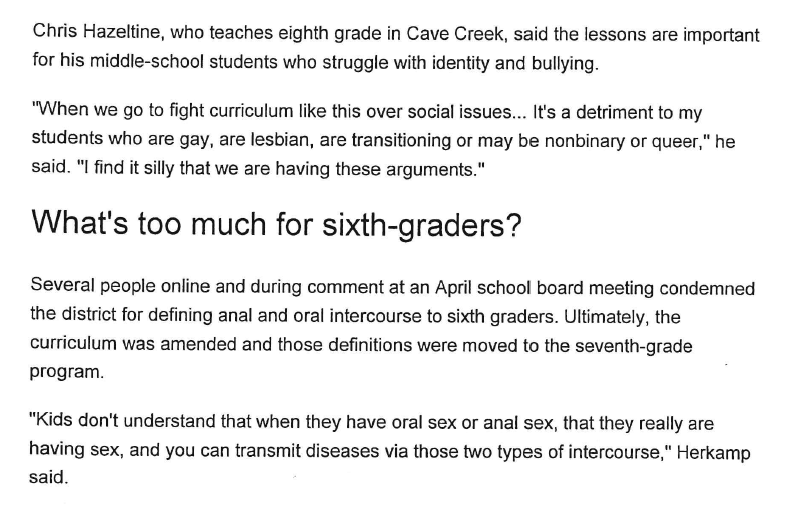 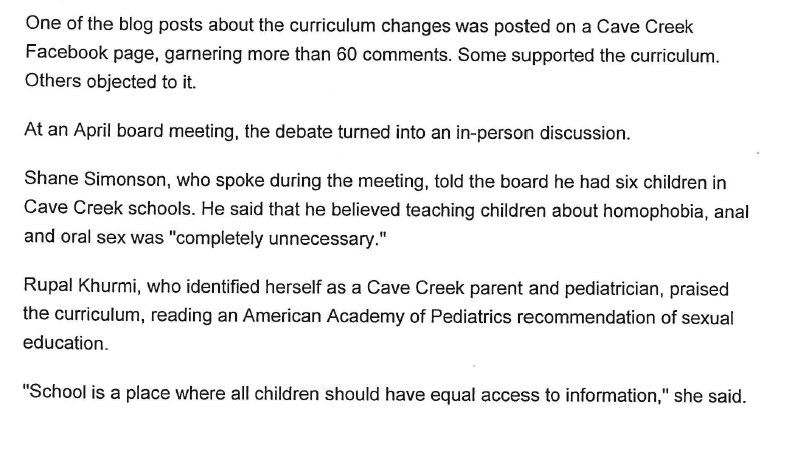 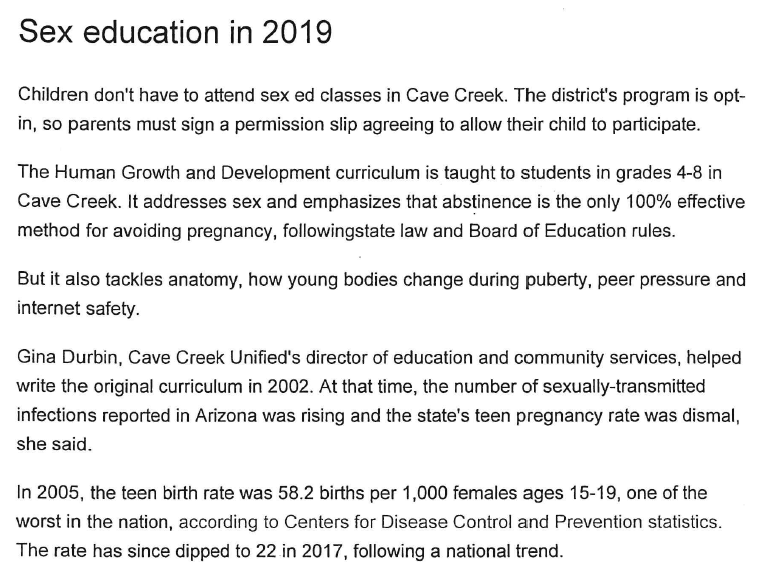 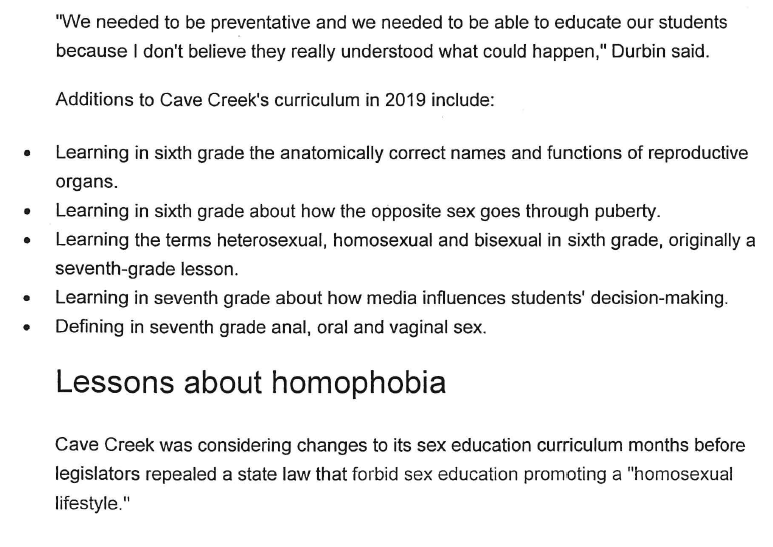 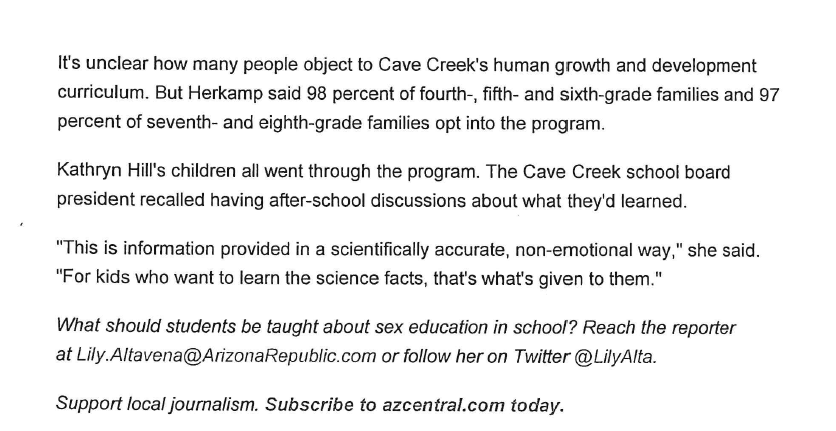 Ms. Herkamp says it’s unclear how many people object to the new curriculum. That could be because she has made it difficult to review the curriculum so parents don’t know what is in it. Also, her boss Superintendent Debbi Burdick began answering emails that were sent to the Governing Board, coming between the elected board members and the public. Since the April 8th meeting, there were at least two board members who did not respond at all to a parent. Clearly Cave Creek has an agenda. AZCentral is letting their questionable behavior slide (another story idea), but we will not. Whether or not residents like the new sex ed curriculum, are they satisfied with the sneaky way it was approved? If the District is not up front about this issue, what else might they be hiding? 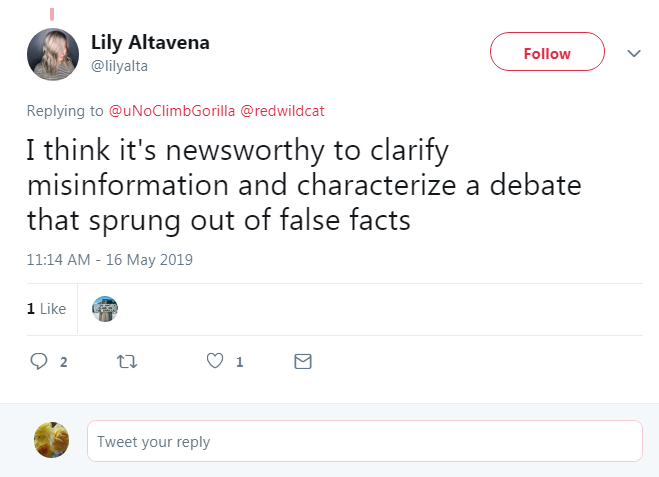 In the end, we want to thank AZCentral for bringing so much attention to this little website. Their negative recognition, like the reporter’s tweet above, has confirmed the need for this modern outlet to share the truth with parents throughout the country.