The Return of Bill Gates in American Schools

Previously we wrote a piece on Bill Gates and his wife, Melinda, and their phony softhearted global programs which once implemented do more damage than the original “crisis.”

To the surprise of many, Bill Gates was instrumental in the development of Common Core standards in American schools. Common Core was all the rage, without the facts and figures to prove its benefits. Meanwhile, Gates engineered the perfect opportunity to data mine the countries’ schoolchildren and their families for who knows what.

In 2017 Bill Gates admitted there were shortcomings in Common Core. Instead of taking himself out of the education scenario, he doubled down and insisted on more. This key paragraph from Philanthropy Daily showcases Gates’s dismissal of parents and their role in education:


Keep this in mind as the aftermath of the Corona Virus takes shape. Parents are marginalized so Gates CAN rewire the students’ brains.

So why is Bill Gates now getting himself into the vaccine business as Corona Virus is controlling the planet? Actually, his involvement in vaccines is nothing new. In 2013 he was confronted about a polio vaccine he was behind which physically damaged 48,000 children in India and Chad. This chilling clip from Infowars should be in everyone’s back pocket when the next door neighbor delights about the possibility of a cure all Gates Corona vaccine. Scroll to the 1:55 mark where he says he’s concerned about “the tragic death of young people”. Yet Bill Gates is a huge Planned Parenthood supporter and admits it in this video.

Now that Bill Gates has all kinds of personal data from his less than stellar adventure into education curriculum, what can he use it for? Could the data be used to target children as guinea pigs for his new Corona vaccine? This piece in Tott News from Australia chronicles Gates’s past endeavors and his history in vaccine development. Pay close attention to his ties with the World Health Organization, among other powerful global abortion-loving conglomerates. This is the same World Health Organization which is currently under scrutiny by President Trump and many others due to its protection of Communist China. 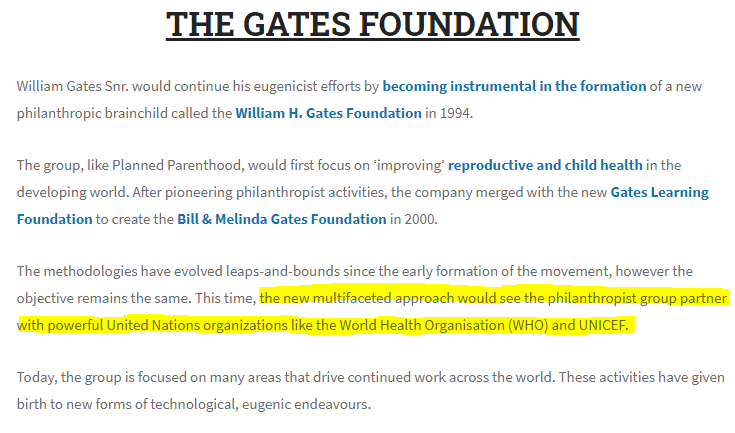 
Is it any coincidence Dr. Deborah Birx, President Trump’s appointee as the Corona Virus Response Coordinator, also has quite the background in global health and initiatives? And what about Bill Gates predicting a pandemic back in November 2019, and the pandemic has unfolded pretty closely to what is described in this Coinspeaker article.

Ironically, our children are now stuck learning in front of screens, not just as an extra curricular activity, but all day due to school closures. Technology is just what Bill Gates needs America’s children to be dependent on. Remember the opportunity with Common Core to rewire our brains? We know the sex ed crowd hasn’t taken the pandemic off, they are as aggressive as ever. Did these events just fall into place so Bill Gates can fly in like Santa Claus on Christmas Eve and fix it all?

Speaking of Santa Claus, Melinda Gates predicts there will be a second wave of the Corona Virus in the fall. Should we just mark our calendars now that all church services will be shut down this coming Advent and Christmas? The Daily Mail reports what Melinda Gates believes is the process to reopen the United States:


How much credibility should we give Mrs. Gates being that she has donated $375 million to population control, or in other words, abortion? What guarantee do we have that any vaccine she and her husband develop will be safe? Corona Virus is not Bill and Melinda Gates’s target, instead their target is our children. When your neighborhood school district “highly recommends” or tries to mandate a Corona vaccine for re-entry, ask them if Bill Gates is in charge of your child’s health and education.

Kids Are Learning More Than We Think While Schools are Closed
SOURCE: https://www.notinourschools.net/the-return-of-bill-gates-in-america...