The Bible Should Be Used In Schools

Please see the attached article that appeared in the Wall Street Journal:  The logic expressed by Roma Downery and Mark Burnett make a lot of sense to me and the Supreme Court agrees.  From 1620 to 1918, this was the main text used in our public and private schools...then the Secular s took over.  Let's take it back.
Wes

By ROMA DOWNEY AND MARK BURNETT


Have you ever sensed in your own life that "the handwriting was on the wall"? Or encouraged a loved one to walk "the straight and narrow"?

Have you ever laughed at something that came "out of the mouths of babes"? Or gone "the extra mile" for an opportunity that might vanish "in the twinkling of an eye"?

If you have, then you've been thinking of the Bible. 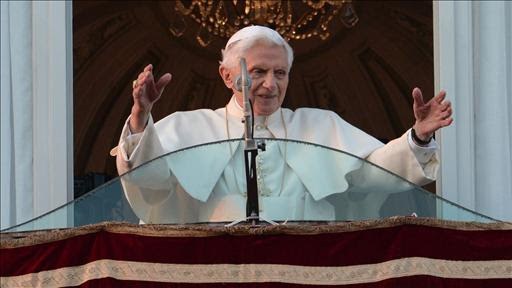 These phrases are just "a drop in the bucket" (another biblical phrase) of the many things we say and do every day that have their origins in the most read, most influential book of all time. The Bible has affected the world for centuries in innumerable ways, including art, literature, philosophy, government, philanthropy, education, social justice and humanitarianism. One would think that a text of such significance would be taught regularly in schools. Not so. That is because of the "stumbling block" (the Bible again) that is posed by the powers that be in America.

It's time to change that, for the sake of the nation's children. It's time to encourage, perhaps even mandate, the teaching of the Bible in public schools as a primary document of Western civilization.

We know firsthand of its educational value, having grown up in Europe—Mark in England, Roma in Ireland—where Bible teaching was viewed as foundational to a well-rounded education. Now that we are naturalized U.S. citizens, we want to encourage public schools in America to give young people the same opportunity.

This is one of the reasons we created "The Bible," a 10-part miniseries premiering March 3 on the History Channel that dramatizes key stories from Scriptures. It will encourage audiences around the world to open or reopen Bibles to understand and enjoy these stories.

Without the Bible, Shakespeare would read differently—there are more than 1,200 references to Scripture in his works. Without the Bible, there would be no Sistine Chapel and none of the biblically inspired masterpieces that hang in countless museums world-wide.

In movies, without biblical allegories, there would be no "Les Misérables," no "Star Wars," no "Matrix," no "Lord of the Rings" trilogy, no "Narnia" and no "Ben-Hur." There would be no Alcoholics Anonymous, Salvation Army or Harvard University—all of which found their roots in Scripture. And really, what would Bono sing about if there were no Bible?

Teaching the Bible is of course a touchy subject. One can't broach it without someone barking "separation of church and state" and "forcing religion down my throat."

Yet the Supreme Court has said it's perfectly OK for schools to do so, ruling in 1963 (Abington School District v. Schempp) that "the Bible is worthy of study for its literary and historic qualities. Nothing we have said here indicates that such study of the Bible or of religion, when presented objectively as a part of a secular (public school) program of education, may not be effected consistently with the First Amendment."

The Supreme Court understood that we're not talking about religion here, and certainly not about politics. We're talking about knowledge. The foundations of knowledge of the ancient world—which informs the understanding of the modern world—are biblical in origin. Teddy Roosevelt, the 26th president known more as a cigar-chomping Rough Rider than a hymn-signing Bible-thumper, once said: "A thorough knowledge of the Bible is worth more than a college education." 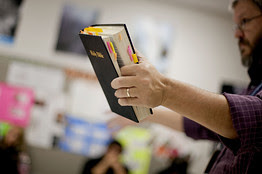 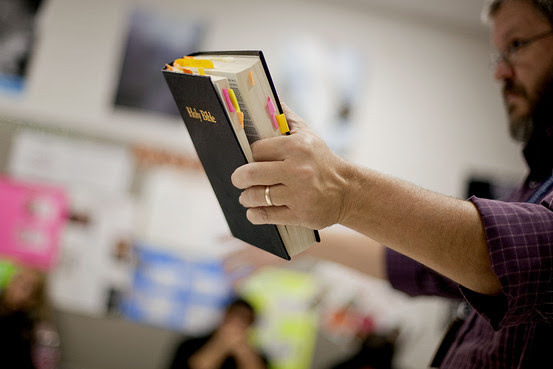 A Bible class at Woodland High School in Cartersville, Ga.

Can you imagine students not reading the Constitution in a U.S. government class? School administrators not sharing the periodic table of the elements with their science classes? A driver's ed course that expected young men and women to pass written and road tests without having access to a booklet enumerating the rules of the road?

It would be the same thing, we believe, to deny America's sons and daughters the benefits of an education that includes a study of the Bible. Although we are both Christians, the list is long of ardent atheists who appreciate the Bible's educational heft while rejecting its spiritual claims. It is possible to have education without indoctrination. On this point, believers and nonbelievers should be able to "see eye to eye." (More Bible goodness.)

Interestingly enough, the common desktop reference guide "The Dictionary of Cultural Literacy" best sums up the Bible's value as a tool of cultural literacy. Its first page declares: "No one in the English speaking world can be considered literate without a basic knowledge of the Bible."

Can we hear an amen?

Ms. Downey is an actress best known for her role in the TV series "Touched by an Angel." Mr. Burnett is the producer of several TV shows, including "Survivor" and "The Voice."

A version of this article appeared March 1, 2013, on page A11 in the U.S. edition of The Wall Street Journal, with the headline: Why Public Schools Should Teach the Bible.