1. Most of you know that HB2047 Common Core Curriculum passed in the House with only 9 Republicans voting against it. It is now an uphill battle in the Senate with only 17 Republican Senators out of 30, and four of those are more like Democrats. Nonetheless, let's hit them hard with "NO on HB2047 Core Curriculum" in the subject line. Go to http://arizonafreedomalliance.ning.com/group/watching-schools and scroll down to the Discussions Forum to find several postings with talking points. Keep the messages short, 1 or 2 talking points at most.

2. For those of you who live in Phoenix:

You have flooded the Mayor's phone lines. There have had so many phone calls to the Mayor's office that Phoenix has decided to move the location of Tuesday's Phoenix City Council meeting.

A very large crowd is expected.

Please show up and tell Mayor Food Tax that we don't want men in the ladies bathroom and that he needs to keep his campaign PROMISE to end the Food Tax by April 1. 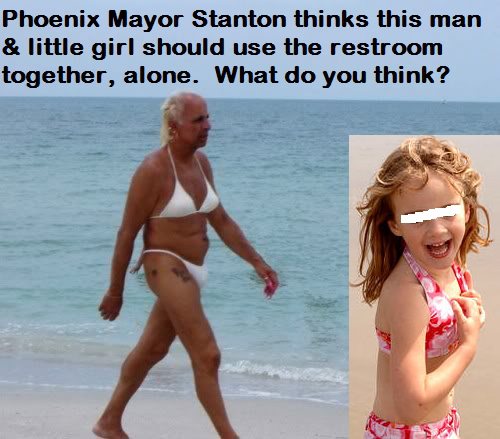 We lost this battle!!