Suppose that an authoritarian government decides to embark on a program of curricular reform, with the explicit goal of indoctrinating the nation’s high school students. Suppose that it wants to change the curriculum to teach students that their government is good and trustworthy, that their system is democratic and committed to the rule of law, and that free markets are a big problem.

Will such a government succeed? Or will high school students simply roll their eyes?

Questions of this kind have long been debated, but without the benefit of reliable evidence. New research, from Davide Cantoni of the University of Munich and several co-authors, shows that recent curricular reforms in China, explicitly designed to transform students’ political views, have mostly worked. The findings offer remarkable evidence about the potential influence of the high school curriculum on what students end up thinking -- and they give us some important insights into contemporary China as well.

Here’s the background. Starting in 2001, China decided to engage in a nationwide reform of its curriculum, including significant changes in the textbooks used by students in grades 10, 11 and 12. In that year, China’s Ministry of Education stated that education should “form in students a correct worldview, a correct view on life, and a correct value system.”

1. Students should learn about, and value, Chinese “democracy” and political participation.

2. Students should learn about the importance of the rule of law for legitimizing the Chinese government.

3. Students should study the “Three Represents” ideology set out by Jiang Zemin, who served as China’s president from 1993 to 2003. The idea of the “Three Represents” is to extend political influence to people who were traditionally excluded from power under communism, but who are important to the nation’s socioeconomic success (such as managers and employees working for private business).

4. Students should understand the limits of free markets, and should form a positive view about China’s distinctive approach to the economy.

5. Students should be conscious of environmental issues.

6. Students should develop an appreciation for the diversity of ethnic heritages in China, and the Han majority should not have discriminatory views about minorities.

On two questions, however, the curricular reforms failed. Students didn't become more favorably disposed toward environmental protection. They were not more likely to give the environment priority over economic growth, and they were not more willing to give up some of their income to protect the environment. Nor was there a significant change in the attitudes of Han Chinese students (the majority) toward minorities.

These findings raise a host of questions. Why were the last two reforms unsuccessful? It is reasonable to speculate that in recent years, Chinese students have been concerned above all about economic growth and therefore were less willing to want to focus their attention on environmental protection. With respect to minorities, the students’ beliefs appear to be deeply engrained, and essentially impervious to curricular influences.

Notwithstanding the two failures, it is striking, and somewhat ominous, that government planners were able to succeed in altering students’ views on fundamental questions about their nation. As Cantoni and his co-authors summarize their various findings, “the state can effectively indoctrinate students.” To be sure, families and friends matter, as do economic incentives, but if an authoritarian government is determined to move students in major ways, it may well be able to do so.

Is this conclusion limited to authoritarian nations? In a democratic country with a flourishing civil society, a high degree of pluralism, and ample room for disagreement and dissent -- like the U.S. -- it may well be harder to use the curriculum to change the political views of young people. But even in such societies, high schools probably have a significant ability to move students toward what they consider “a correct worldview, a correct view on life, and a correct value system.” That’s an opportunity, to be sure, but it is also a warning.

To contact the writer of this article: Cass R. Sunstein at csunstei@law.harvard.edu.

To contact the editor responsible for this article: Timothy L. O'Brien at tobrien46@bloomberg.net.

Their goal is mass control and behavior and not only in the class room and at PTA Stasi sessions (I mean meetings).

"If they knew they were the real power in the whole operation, if they knew they were investing feelings into images all day long, if they could actually slow down enough to see how they do this….then they would be far less prone to taking instruction about what feelings they “ought to” invest in second-hand images."
"Fanaticism of any kind begins with individuals projecting feelings into images. This is harnessed by leaders, who then choose the images and direct which feelings are permitted." 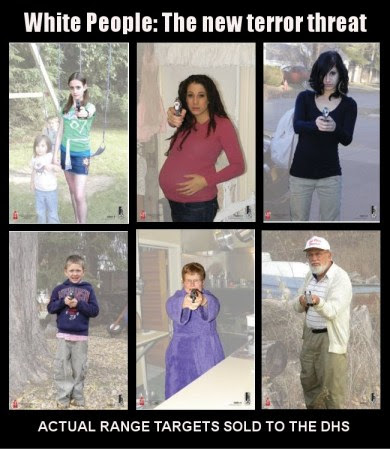 Under the Obama Administration the Federal Government Spent Millions on These Racist Shooting Targets, Depicting Only White US Citizens as Terrorists! - See more at: http://nationalreport.net/shooting-targets-with-images-of-children-...

The Basis of Mass Mind Control  ~ link ~ Do take the time to read this one in full at the link.  Stirling