Education Inspired by the Devil

There is no way to deny it anymore. The Democrats, the Party of Death, is Satanic. The ghoulish globalists have brought Satan to the forefront and the relationship between the Democrat Party and evil principles can no longer be ignored. As far as Arizona, we have our own radical liberals who pretend to like kids, but really use those kids for diabolical purposes.

Is this too difficult to read? Either continue with us as we connect some really large dots, or go back to Fox News or MSNBC and be lulled to sleep until the next fixed election. The Satanic Conference came to Scottsdale in February, but the Satanists were already here, slithering in plain sight at the Arizona Legislature and in public school buildings.

Secular Coalition of Arizona tricks the public into believing it exists to uphold the separation of church and state and protect the Constitution. Cleansing the public square of anything morally good creates a huge vacuum, but the sales pitch often works when it’s done with a smile. Once a vacuum exists, it will be filled with something. History has proven the filler will not be good or safe. Think about the differences in a public school classroom in the last 60 years since prayer was removed from schools. Would you rather send your child to a classroom similar to Miss Landers’s on “Leave it to Beaver” or a classroom in Phoenix Union on one of their many fight days?

Here is a rosy introduction to Secular Arizona. For families who aren’t religious, it sounds pretty good. But even in the introduction, the director twists the words and the truth. Satan is also known for his lies and confusion.

Check out these wristbands. No fear of Satan, but gosh that darn virus is still around so let’s get an experimental shot and jab our kids at the same time. Then let’s brag about it by wearing a Secular Arizona wristband because it’s all about self. 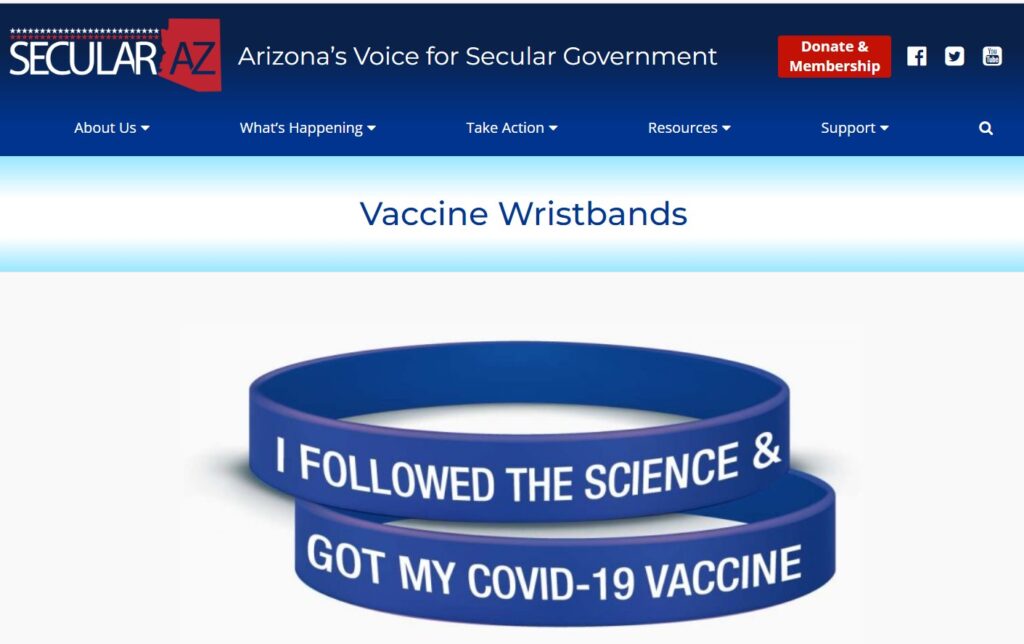 It’s a good idea for various organizations to hold forums so voters can get to know candidates, especially for school boards. Local races don’t get enough attention yet they are the most important. These Secular Arizona forums are a great marketing tool; as folks tune in, they will be soothed into thinking Secular Arizona is an asset to the community. The truth is Secular Coalition of Arizona is a rubber stamp for the abortion industry.

Planned Parenthood is now aggressively pushing drugs on children. Any child who makes it into the world is now subject to the LGBTQABC agenda at every turn. Now there is a second reason to wriggle into schools–get those kids on lifelong hormones and other medications, especially without parental permission. The Pink drug peddlers are just step one; at some point those same children may become so confused they will seek surgery to remove male or female body parts, permanently physically and emotionally damaging them. This should come at no surprise. Planned Parenthood has dehumanized children for decades, the stage was set. Think about their wording–fetus, clump of cells, product of conception, failed birth control. Then think of unique descriptions of any particular child–blue eyes, curly hair, big smile, boy, girl. It’s so much easier to kill or mutilate someone when he or she is described in a cold, insensitive way. Satan smiles.

Before continuing, please read this link about the use of aborted tissue in Satanic rituals. Yes, it’s hard to fathom. Truth must be tackled head on. Is there a doctor present during this ritual? What happens if there are medical complications? Or would they not be called “medical” complications because it’s simply a benign process? 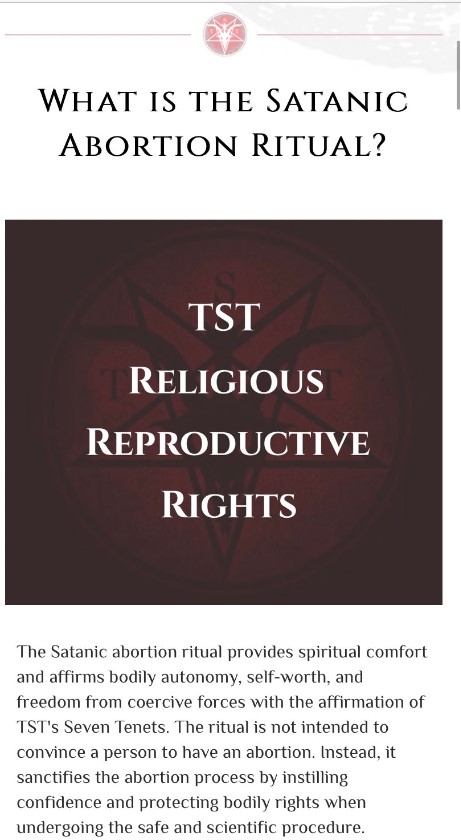 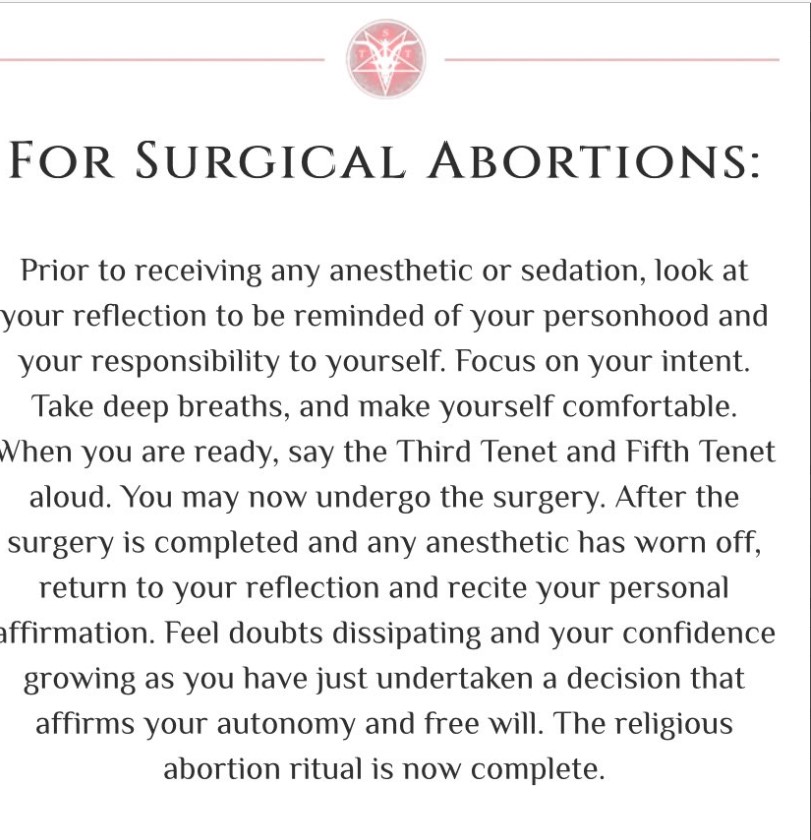 One of the interviews produced by Secular Coalition of Arizona was with Chalice Blythe, of the Satanic Temple. 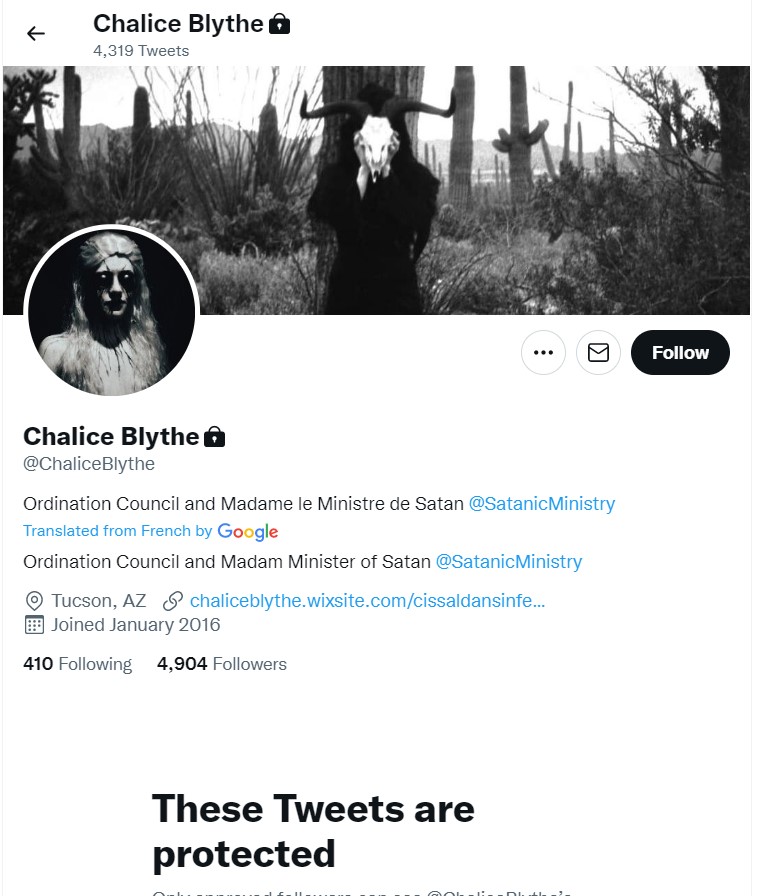 Her twitter page looks cozy. Keep in mind this same organization is successfully pushing Satan Clubs into schools. Here is an introduction to Blythe and her temple.

Secular Coalition of Arizona is not just about separating church and state, but also supporting Satanists. Blythe went into great detail about Satan and the rights the Satanic Temple has as a religious organization, and for these reasons she says the ritual of abortion should be protected.

Once there is no authority, or the chosen authority is self, we cannot survive. The family is the vital cell of society. The Satanists prove this as they destroy the family, and Secular Coalition of Arizona gave the Temple a platform to advertise. Due to vigilant parents we are witnessing too many teachers and education administrators forcing luciferian principals on kids who don’t belong to them. Satan smiles again, he hates children. In the following clip, Ms. Blythe explains why burying deceased babies is a violation of her religious practice.

Here is more from Satan. Yes, this agenda is in your public schools, some way some how. If you don’t have a child in public schools, check out ESPN, TLC, Disney, Target, Kohl’s, Chase Bank, Arizona Diamondbacks, and most institutions as they push Pride Month on children. 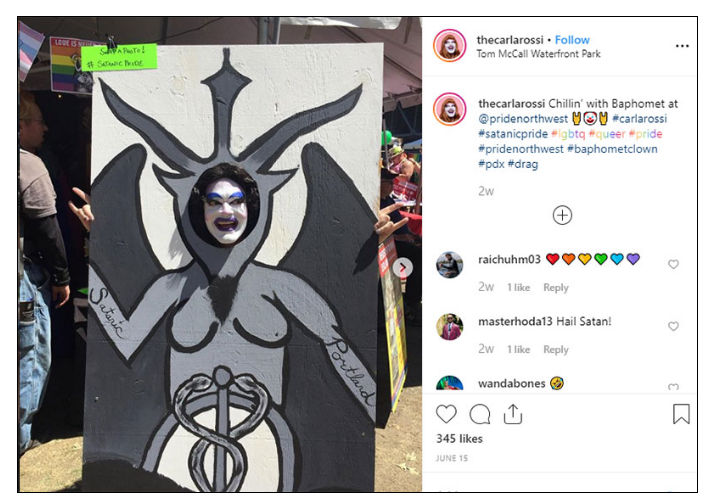 We don’t recommend perusing the Satanic Temple website. But we did screenshot a few things so our readers know what Secular Arizona is doing. Check out this illustration. 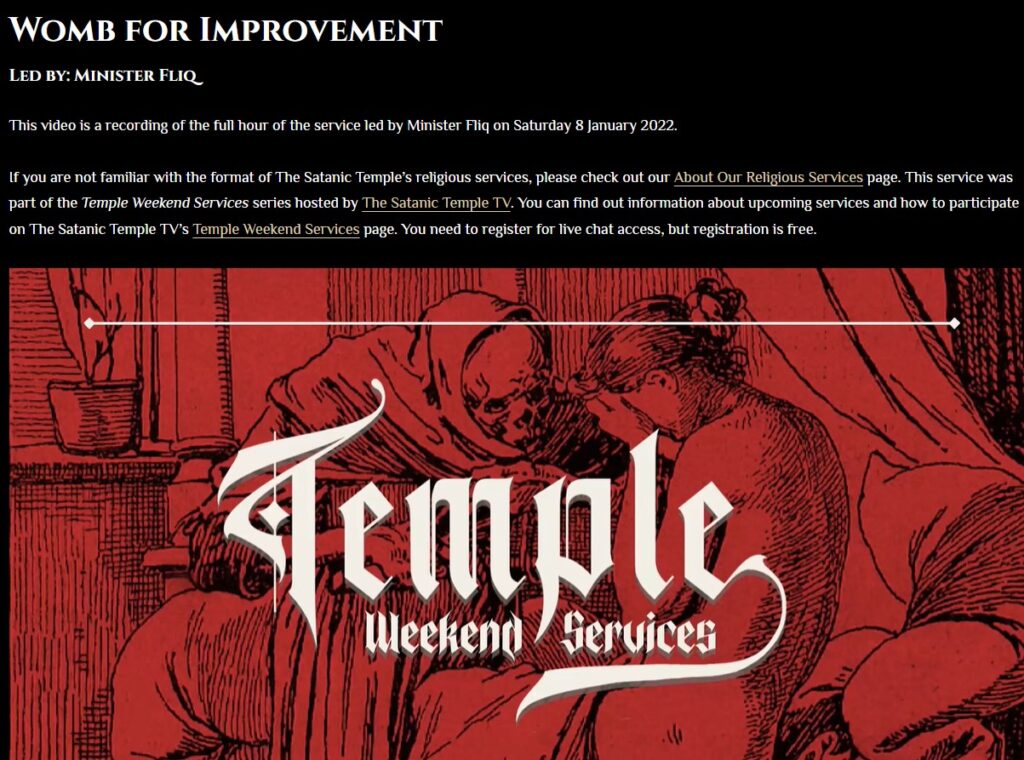 Uh oh, in what context do we hear toxic masculinity? Here is another attempt to break up the family. Gender Studies strikes again! 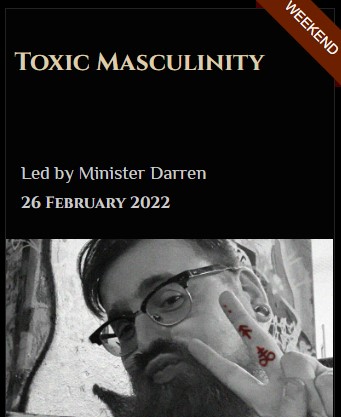 Secular Coalition of Arizona works with the Satanic Temple to keep abortion frequent and legal. In the process, their pitch to the public is all is well, abortion is normal, needed, life-saving, religious, and easy. As these groups struggle to tell us about normalcy, we witness very different things in the media from their side. For example, the behavior in the photo below is not normal. 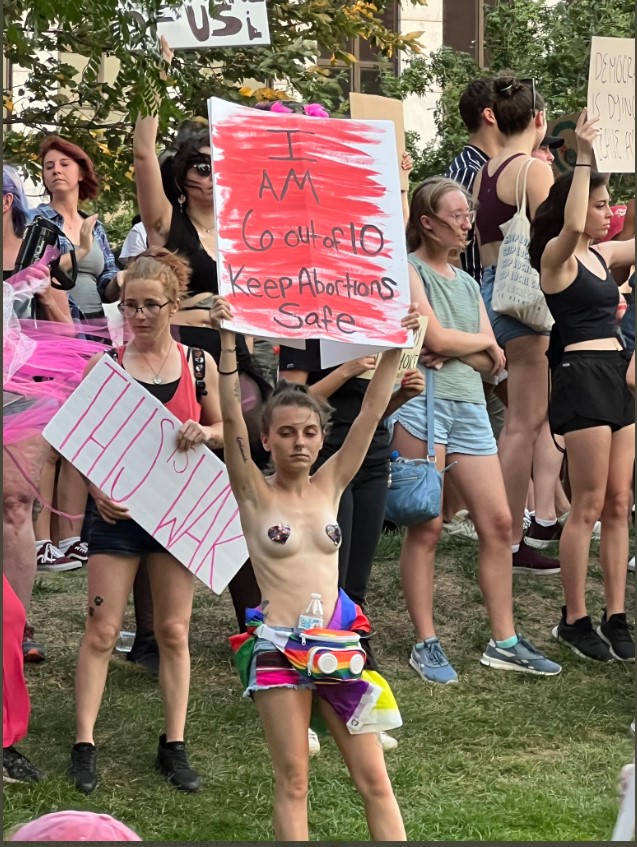 Spraying graffiti and using vulgarities in public is also not normal (Satanic Temple’s Chalice Blythe stressed rebellion in her video). This photo was from the abortion protest at the Arizona Capitol on June 24, 2022. 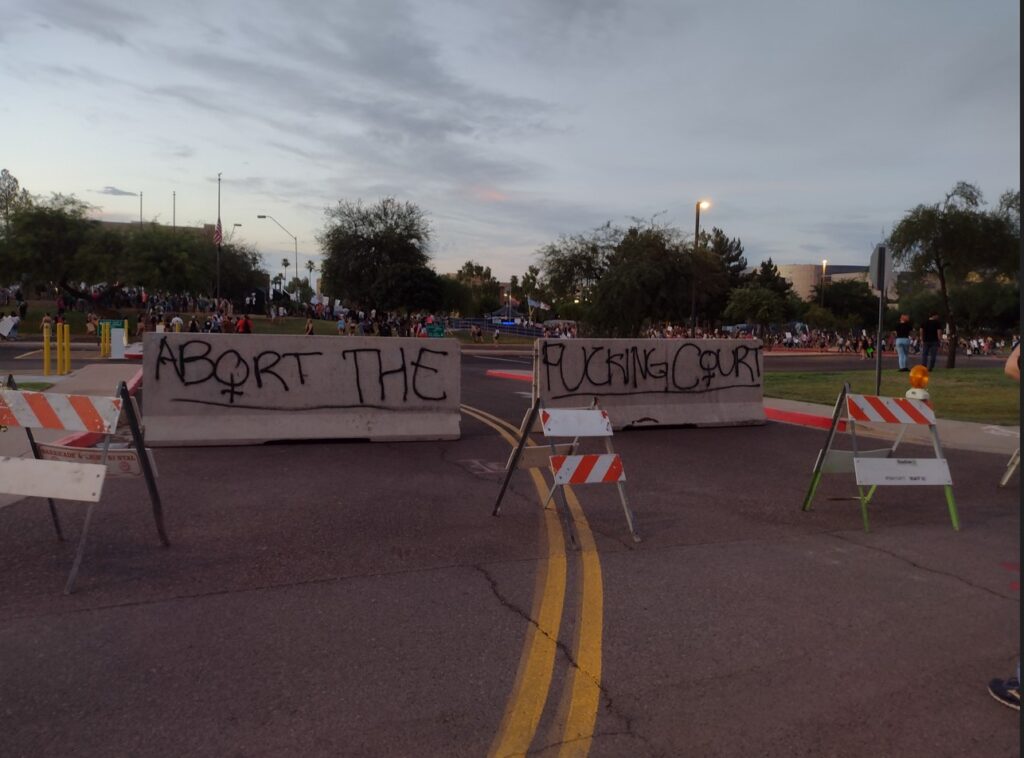 Here is another photo of the June 24, 2022 abortion march in Phoenix. Look at this man’s sign. Did Ms. Blythe make it for him? 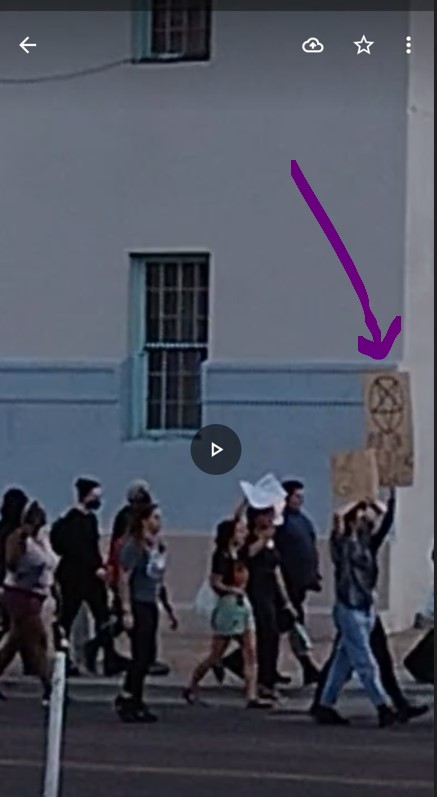 We might think this is just coincidental, until we see one more Secular Coalition video. Recently, Planned Parenthood’s Chris Love was the guest. She was interviewed about how charming abortion is and what to do if Roe goes down in the Supreme Court. There was a lot to unpack–if there really are fact checkers they could write a thesis about her inaccuracies. 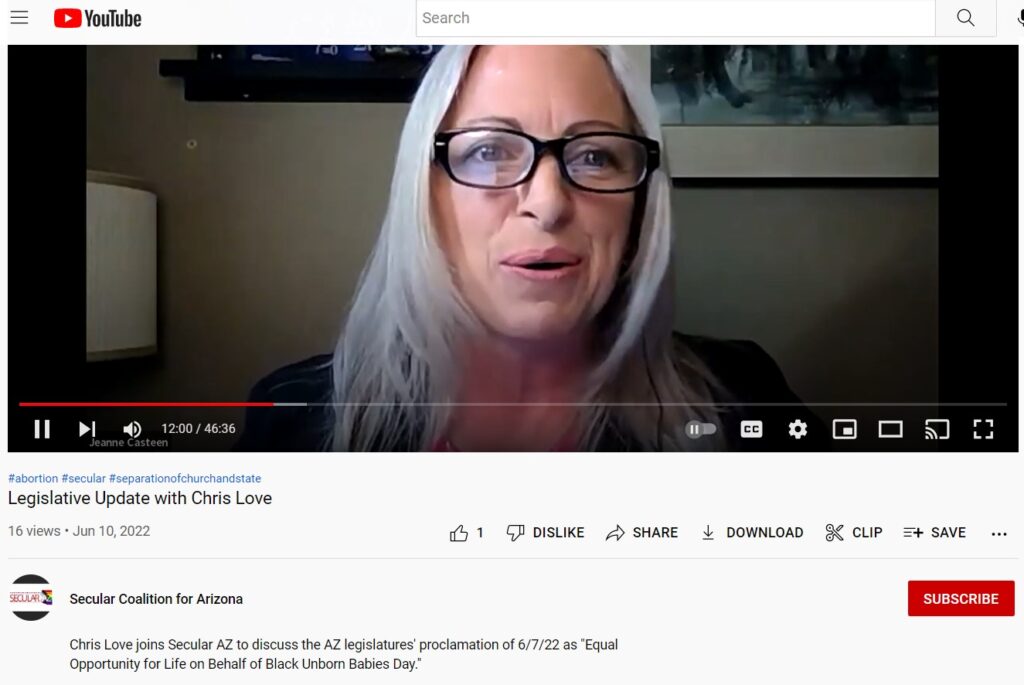 If 99% of post-abortive women and men are feeling so good, why is there a waiting list for Rachel’s Vineyard retreats in Arizona?

What other political issue turns mothers against their own children? The domino effect leads to men are then allowed to ignore their responsibilities. Women see their value in who they can sleep with and nothing more. Children who are dragged to #BansOffOurBody rallies hear the bad news that they could have been swept away in a quick procedure and maybe some of their brothers and sisters suffered that fate. When the surviving children go to the library or school, they are force-fed Drag Queens, which reduces women into sexual entertainment. There is nothing warm and fuzzy about abortion and the LGBTQXYZ agenda. Both destroy children. Satan’s work.

The violence inside the abortion clinics has spread into the culture but nobody talks about it. When innocent life is devalued, all life is devalued. This is Planned Parenthood’s Chris Love’s husband’s twitter handle. 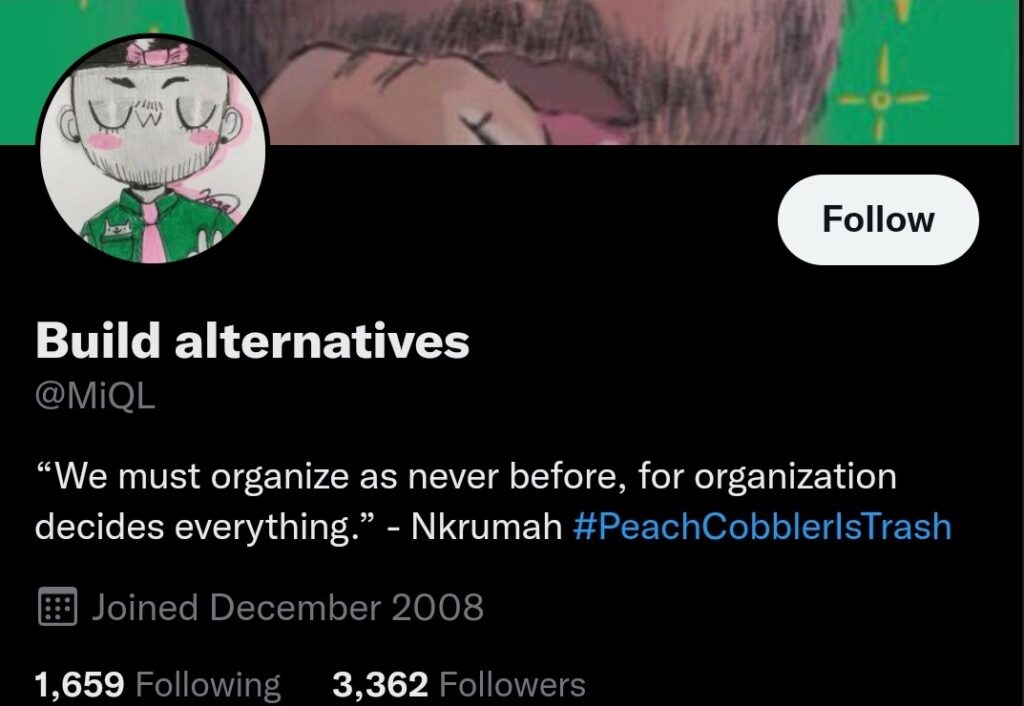 Is her husband calling for violence by liking the tweet below? 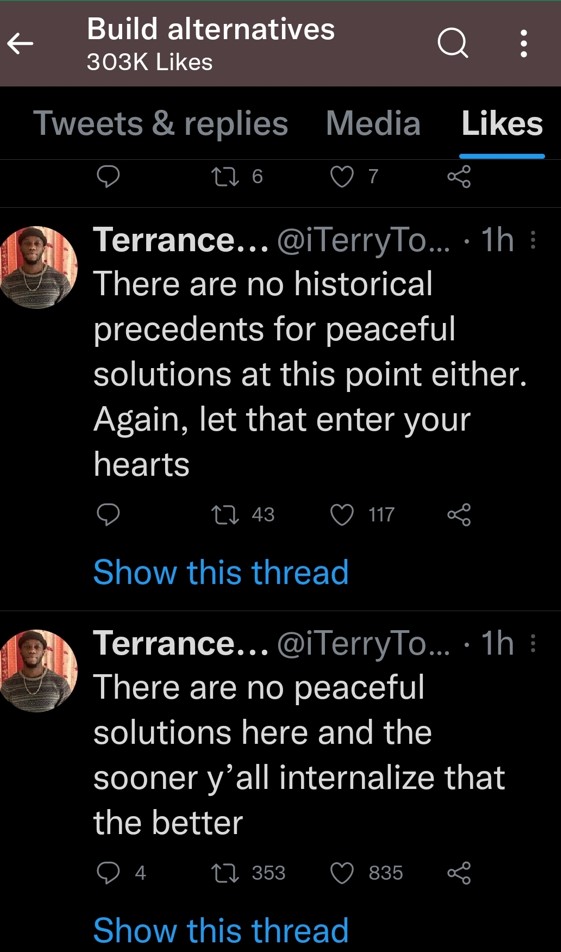 Well, if Mr. Chris Love called for violence, he got it. During the march along the streets by the Arizona Capitol and the gathering after at Wesley Bolin Park, the protestors were peaceful. But after dark, it got out of hand. The Arizona Legislature was in session and many marchers approached the Senate building just a short distance away. Watch at about 1:40 mark when those who have no ill-effects from abortion try to kick in the glass doors of the Senate.

Is this tweet and reply from Chris Love something the FBI should be investigating? 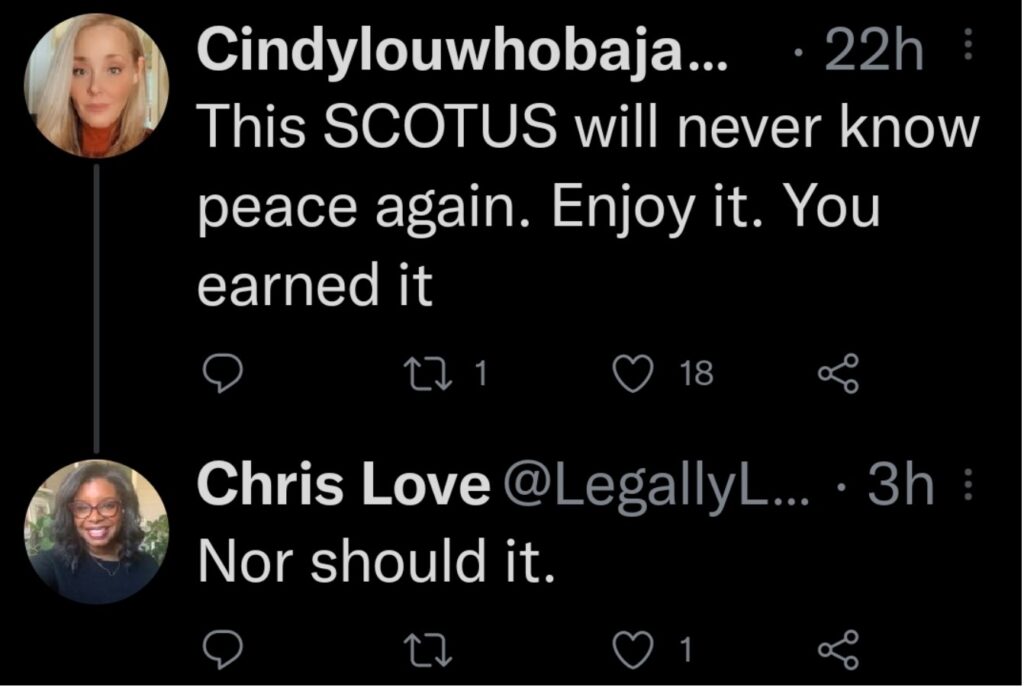 There you have it: Secular Coalition of Arizona, the Satanic Temple, and Planned Parenthood are a violent team, both inside a woman’s body and outside. They all have each others’ backs and for this reason traditional Democrats and almost all Republicans are afraid to challenge them. Many people attended the #BansOffOurBodies rally in Phoenix after Roe was overturned on Friday. This is their Trump rally. The other side can’t rally around gas prices, overpriced homes, a man with dementia supposedly in the White House, failed foreign policy, a neutered military, dangerous cities, masking kids, Drag Queens in libraries, or closed businesses. All they have is abortion, the litmus test for public office. Unfortunately, their rally in Phoenix ended with physical violence, and the signs they carried were often profane. #BansOffOurBodies was not a family-friendly event, but why would it be? When a political issue motivates people through death and destruction, we are doomed. Unless our elected officials have a change of heart……

All of you Republicans in office, and yes in the Arizona Legislature, who were too lazy to stand up for children and the women in your life, your day of reckoning has come thanks to six Supreme Court justices. YOU will have to make big decisions–are you really pro-life and pro-family? Here is a clip from the Arizona Legislature late on June 24, 2022 when Representative Jake Hoffman tried to bring forth a Prolife resolution. Wannabe Speaker of the House Ben Toma reduced those babies to a “political stunt”. Arizona legislators, we are watching all of you.

Hey lobbyists, you can’t hide behind a Supreme Court decision anymore. Those of you who are men will actually have to be a man and take a stand to protect women and children. Will the media be mean to you? Yes. If you choose life in every political decision you make will you be uninvited to some of those fancy dinners? Yes. Will you miss out on some trips with your colleagues because you are just too controversial? Yes. Think about it, though. Your losses are a much smaller sacrifice than the sacrifices made by all those little children for the last 49.5 years. Lawmakers and lobbyistis, will you be on the side of life and family or the side of violence shown in the video below?

Clergy: The same goes for you. If you can’t support life and family from the pulpit you are in the wrong business. The Satanic Temple is not afraid to preach what they believe, why should you be afraid? How often do you tell us “Be Not Afraid”? Churchgoers, if your pastors can’t talk about the ill-effects of abortion coupled with the mercy of Jesus, find a new church. The Diocese of Phoenix: It’s time to get bold, clear and yes, negative when needed in your weekly legislative email updates. Many Catholics monitor on a daily basis what is really going on at the Arizona Legislature and the behind-the-scenes happenings, yet we hear very little from our Diocese. Imagine the good we could do if those who do not have time to watch the legislative proceedings were brought up to date on EVERYTHING about life issues at the Capitol, good or bad. Your emails should include a call to action, but they don’t. Yes, there will be a new bishop. This is a perfect time to let him know we are a prolife state and intend to remain that way.

We are one day into the post-Roe era. What changes will you make to assure Arizona remains friendly to the innocent?