Since April many citizens in Arizona have been scratching their heads wondering what is going on behind closed doors with those “in the know” at the Arizona capitol. Suddenly a 1991 law that protected the heterosexual lifestyle (yes, tradition and science) was hastily overturned by a slim majority in the “Republican” legislature, blessed by pro-family lawyers, and signed into law by Republican Governor Doug Ducey.

Many of us know what overturning the law really means; perhaps those in elected office just don’t have the knowledge our readers have. Hopefully they learn quickly.

During the May Arizona Board of Education meeting, changes to the sex ed law were touched upon. The new slick Arizona Superintendent of Public Instruction, Kathy Hoffman, stated she had some correspondence she wanted to share about it, one of them from Senator Martin Quezada. This is the same Senator Quezada who supports obscene sex ed material as he pimps for Planned Parenthood.

Ms. Hoffman was reminded addressing the sex ed comments was not on the agenda so it would need to wait until the June meeting. Another member slipped that they had been briefed in executive session. The discussion starts at about the 28:40 minute mark of this link. Ms. Hoffman drops Senator Quezada’s name at 35:40.

Ms. Hoffman does not have a poker face. Her Twitter feed has made it clear she does not care about students excelling or being prepared for college or a job after graduation. Instead, she is using her bully pulpit to radicalize students and pit them against their parents and family values. 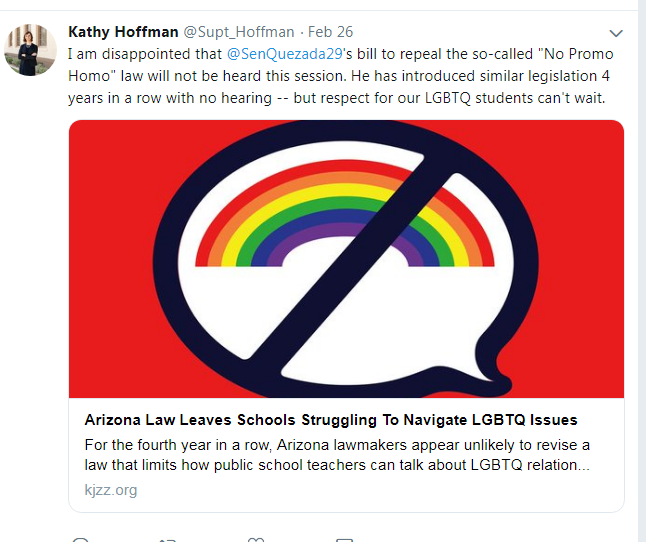 These students will be voting soon and her movement will amass power if we let her. Watch California, she is mirroring their actions and so far the Arizona Legislature is too timid to challenge her.

For this reason, parents and community members who still believe in science and know the vital cell of any society is the family will be gathering at the office of the Arizona Department of Education on Monday, June 24th at 9:30AM. The Arizona School Board meeting where Superintendent Hoffman and the Board will discuss new sex ed details will start at 10AM.

Here is the meeting information:

Parking is available in an adjacent structure 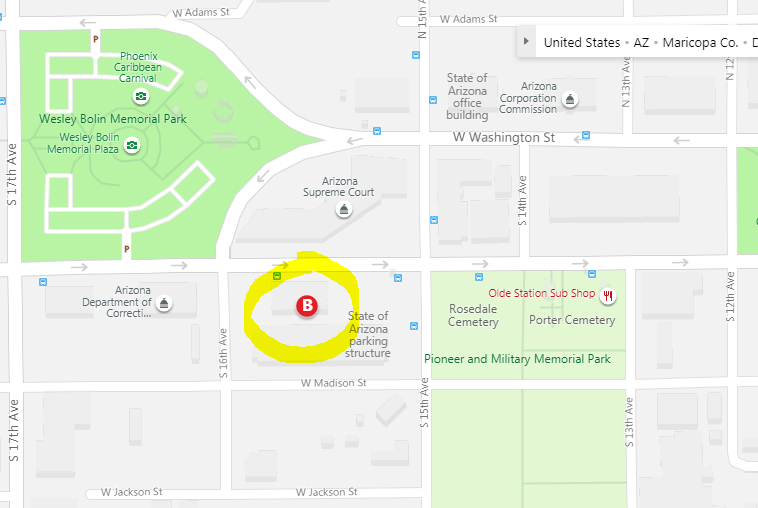 The most important thing we can do is show up. If you have purple, where it because the radical teachers are off for the summer and they will wear red (for Communism). It is important our elected and appointed officials see something other than red when they look into the audience. Our presence will also be noted by the Arizona Legislature. Perhaps they won’t be so quick to make rash decisions in the future if they know parents and families support them when they pass common sense laws.

The meeting on June 24th will also be an opportunity for public comment. Ms. Hoffman is probably lining up speakers on hers and Senator Quezada’s behalf now. If you are inclined, take a comment card and fill it out so you will be called on to speak. You can bring a short written statement and read it if that is more comfortable.

We need to remember Kathy Hoffman was not elected to the Arizona Legislature; she does not write laws nor should she be lecturing the Legislature. It is the responsibility of Arizona Representatives and Senators to write state statutes, hear them three times, make changes as needed, and then vote up or down on them. Let’s let the Arizona School Board know we do take an interest in their decisions, even during the summer. Parents over politics.