While most in the United States consider Arizona a “Red” state, those who live here know that isn’t the case. Well, it the case if the views and practices of individual households are evaluated. But for some reason, that isn’t translating to who is elected to office to represent these households. We assume this is because somehow Democrats are elected, but those who watch the Arizona Legislature year after year know there are plenty liberals in the Republican Party, and they aren’t even hiding anymore.

On March 3, 2022 a bill was quickly passed in both chambers and signed by Governor Doug Ducey, all in one day. Their normal rules of three reads for each bill were suspended. Was there a health emergency? Were Arizonans in danger? Were children being denied access to a public education due to mask or shot mandates? Were illegals streaming over the southern border? Were businesses closing due to Covid protocols and shut downs by the governor? Were there discrepancies found in the election processes in the state? None of the above were addressed at the speed of sound on March 3rd.

The legislation, HB2839, was hurried through both chambers due to some technicalities with candidates having to obtain signatures to be on the 2022 ballot, deadlines, and new district lines that were drawn. Phew, a crisis averted! What was included however, was a small clause buried in the bill which drastically changed the way Precinct Committeemen (the most powerful office in the land, keep that in mind) are elected. How the PC elections were changed took power away from the people. We will not go through the HB2839 weeds on this website. The reason for this introduction is this rushed bill revealed political hypocrisy and we are learning who the thugs are who call themselves Republicans and then fail to protect children. Notice when legislation is about themselves, our elected officials get it done. When it’s about the safety of children or defending the Constitution they took an oath to protect, well, not so much.

After days and days of testimony and interviews this past week, it became evident somebody wanted the Precinct Committeemen language in the rushed bill. Many legislators spoke out and some apologized for voting so quickly. Even some lobbyists took to the microphone at the legislature. Legislative Council, who writes legislation, was also blamed, as were various lobbyists. However, nobody will say which legislator requested the language to thwart Precinct Committeemen. Who are they protecting? 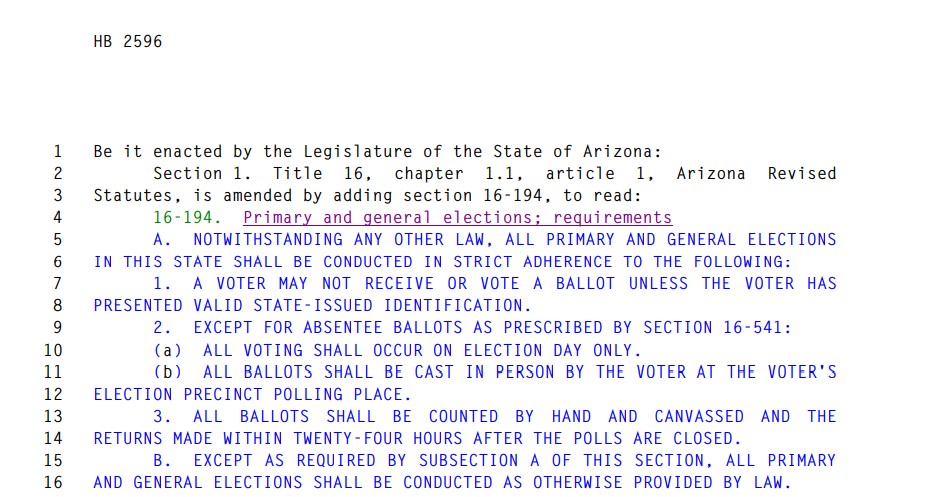 Speaker Bowers has been in office way too long. Isn’t that always the case? Why fix any election when whatever is going on is working for HIM? He represents the Mesa area, which was once extremely conservative. Speaker Bowers knows he can’t get elected in that area with a (D) next to his name, so he is a registered Republican. The same can be said of his cohorts representing LD 25, Representative Michelle Udall (RedforEd supporter) and Senator Tyler Pace.

There is a lot to unravel about Bowers. One concern that we don’t hear much about is from 2018 through 2020, Speaker Bowers sponsored bills to lessen requirements for an individual to be registered as a sex offender. Why is that? In 2020 his bill was HB2807 and he sponsored similar bills in 2018 and 2019. It doesn’t make sense that a father of seven children would not protect his own from a sex offender. That reminds us of Planned Parenthood’s track record in similar situations.

This link to the Arizona Secretary of State’s office shows Bowers’s donations for the 2020 election. Just like state Senator Tyler Pace, there are few to none $10 and $25 donations from neighbors and constituents. Instead, there is an abundance of large donations from Big Pharma and Healthcare PACs, many other PACs, attorneys, and lobbyists. How else does a local district candidate accumulate almost $200,000 in donations?

Why does an executive from Walmart care about a state legislative race in Arizona? One of the Waltons donated $5200. Is Speaker Bowers in office to represent Walmart, Arkansas, or his constituents in Mesa?

Rusty Bowers isn’t ready to call it a day yet. That would hurt the money flow to and from his lobbyists and attorneys, the political consultant fat cats who don’t give a darn about the citizens of Arizona. Open this link and click the green plus sign on the left of each name. Note how many donors are lobbyists. That brings us back to HB2839, the rushed bill which took power from the grassroots. We know lobbyist Jen Marson of the Arizona Association of Counties (AACO) was involved in the language of the “emergency” bill. Why does this lobbying group even exist? Most in Maricopa County have pretty much had it with the weight their own Board of Supervisors has thrown around the last couple years. Is it any coincidence Speaker Bowers killed election integrity bills while the Maricopa County Board of Supervisors have turned a deaf ear on election integrity as far back as 2018? A Superintendent of Public Instruction candidate posted this on September 22, 2018 in a local Republican blog.

To Read the rest of this article go to:
https://www.notinourschools.net/arizona-stop-blaming-the-democrats/