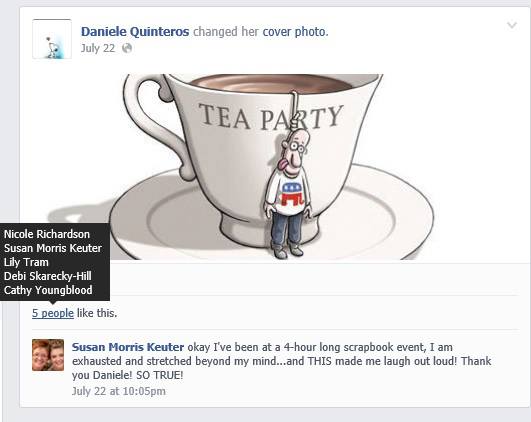 you should post that where tea party members and republicans can see it. I will help.

I posted this to about 3 different sites. Here's hoping some of these folks lose their jobs.

I don't think they should lose their jobs for that, tacky as it is. I would like to see Lilly Tram replaced though. She is way too "Progressive" (read Regressive) for my taste.

Is Susan Keuter really a TEACHER !  the thought of her in a classroom with children makes my blood run cold !

I believe that she is isn't she? She certainly attends a lot of school board meetings. I might be jumping to conclusions here but it seems that anyone that comes to that many meetings is a teacher. I will try to confirm that one.

CORRECTION: Susan Keuter is a parent and not a teacher and also, she was a co-chair of the YES on the override last fall. (According to Julie Smith)

Nicole Richardson is a GPS employee in the Community Relations department, working for Dianne Bowers. Nicole is in charge of the GPS website and multimedia communications. She is really representing the district well, isn’t she? You would think that with all the money being paid to Community Relations employees, GPS should get some decent media and online coverage. You would be wrong. That group of GPS employees doesn’t seem to spend much time doing official jobs.

Susan Keuter is not a teacher. She is a parent who co-chaired the PAC to promote the override (at the request of former board president EJ Anderson). Susan has two children: one graduated from GPS schools and is attending college, the other is a student at Highland High School. Susan Keuter is close to the GEA and used the GEA Facebook group to organize the infamous “We are not Widgets” flashmob. Her son spoke out at a board meeting and passed out the infamous widget photos to board members. Susan has been active in such illustrious groups as TheTruthInGilbert and other Facebook groups that disparage board members Burk, Colvin and Smith. Susan Keuter acquired a great number of email addresses of supporters for the override in 2012, and boasts now of her email list and the reach she has as a self-appointed spokesman for GPS. Susan Keuter recently posted about Julie Smith: “I didn't vote for her in 2012 and those of you that did were fooled, by an agenda minded fool!”

That post appeared on Parents For a Fair School Board, a Facebook group that was formed originally to advance the cause of retaining Brian Yee as a GPS principal at the beginning of the year. The group’s purpose has changed, and it now is a de facto public relations arm of GPS. In June of this year,they were encouraging folks to sign petitions for recalling GPS board members they don’t like. Here’s an example of another organizing effort, posted on July 20th:

“With the first day of school less than 3 weeks away, and the "Social Media" recently approved by the Governing Board, I have had several requests for a block list that was going around the teacher circles back in January.
Well, the list has been updated, so if you'd like a copy please feel free to send a private message and we'll send it to you with instructions on how to block people and/or add ...security to your private Facebook page so only friends see what you're posting.

This is the list that all of us administrator have in place, and a lot of our GPS employee friends have in place. It's perfectly legal, ethical and legitimate to increase the security settings on your page. This way, only those you choose can see your interactions, posts and associations!”

If you don’t see posts online (or even on azcentral.com) from the people who “liked” the cartoon, that’s probably because you’re on the the block list that has been circulated. Daniele Quinteros made that cartoon the banner on her FB page – we know Daniele Quinteros blocks us from seeing her posts. We’re obviously on the infamous block list, too.