The Cave Creek Governing Board pretended to listen to all the concerns before voting. However, after reviewing district emails, it is clear the decision to subject children to LGBTQ sex lessons was made long ago. Cave Creek spent lots of district time befriending those who seek to make money off a perverted and obscene curriculum.

Isaac Akapnitis is currently working as an “educator” at Arizona State University. 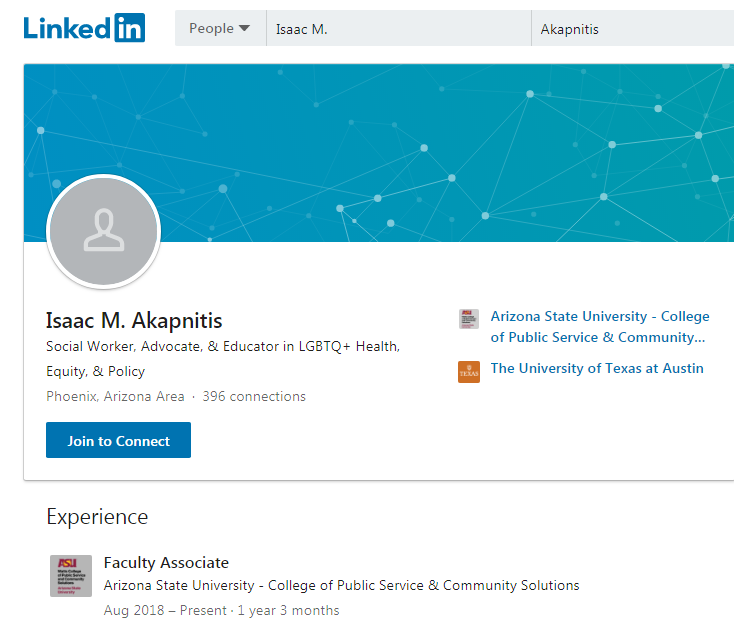 Most likely he is pushing his agenda while being paid by taxpayers. Mr. Akapnitis is also associated with Terros Health, and in his capacity he is there to promote LGBTQ services. 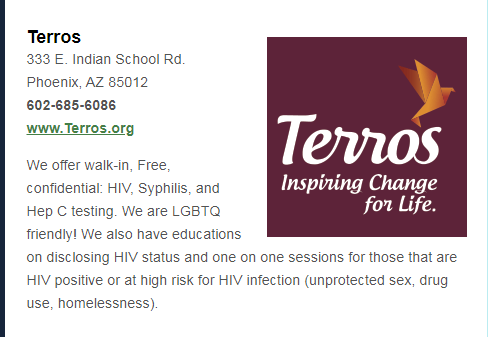 Here is a series of emails, some of which Mr. Akapnitis is a part of. Also note the reference to Robert. Yes, the ACLU’s BFF Robert Chavaleau, who never met a camera he didn’t like, strikes again. His child is transgender, therefore all other children in the state of Arizona who are minding their own business must be subjected to his child’s confusion.

On September 20, 2018, there was a professional development day for Cave Creek Schools. Here are the presentations: 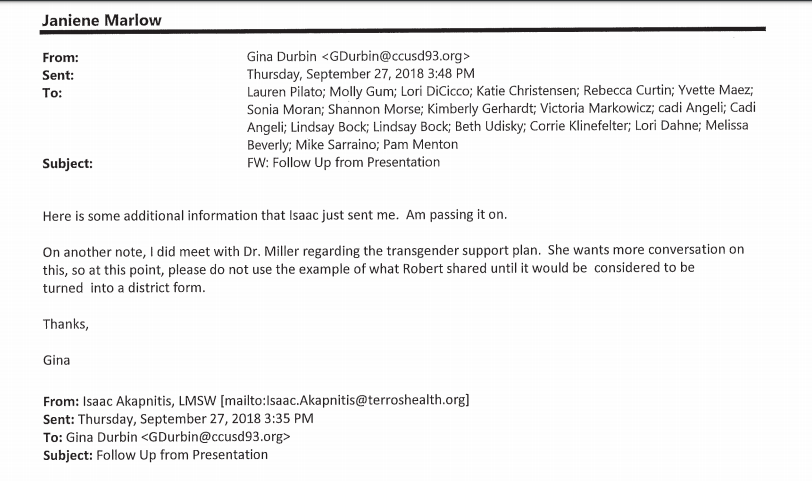 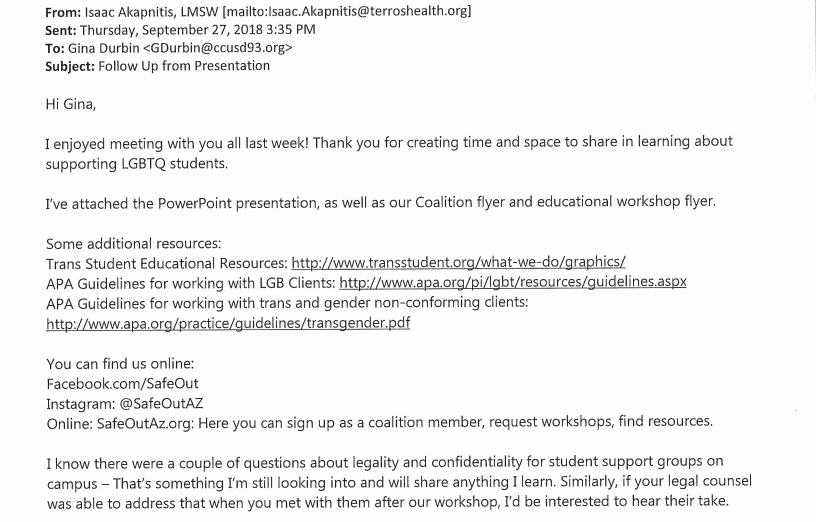 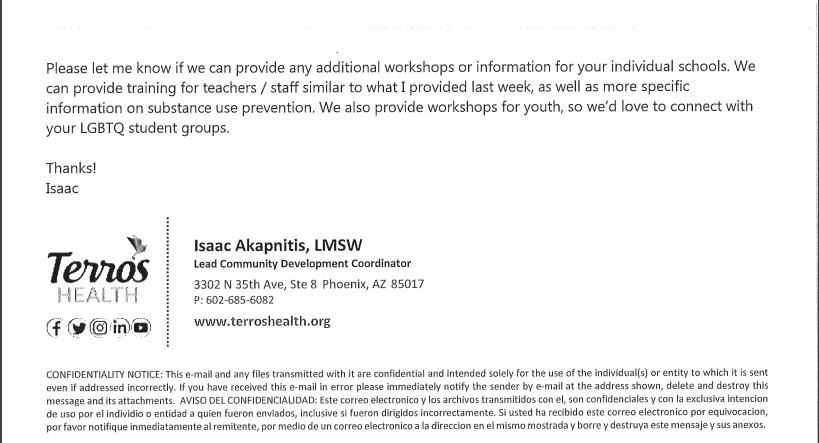 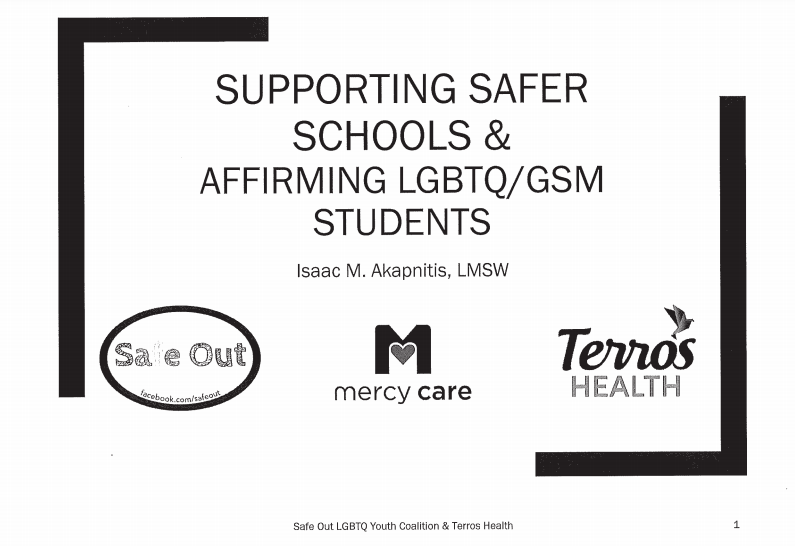 In the email chain that was provided to us, the following cartoon was shared. The Gender Unicorn is very similar to the Genderbread Person which was snuck into Flagstaff Schools last year without parents knowing. Is the same going to happen in Cave Creek with a unicorn instead? 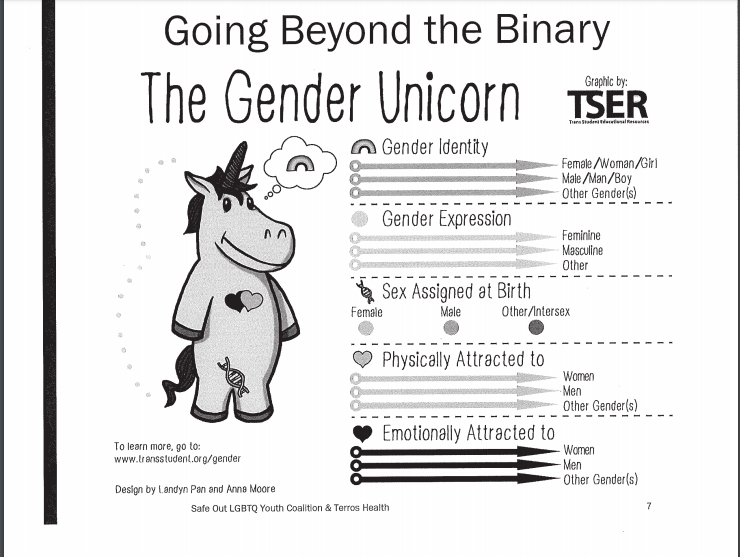 When parents complain to Cave Creek administration they weren’t informed of the Unicorn and its non-scientific genetics lesson, they will likely be told there were numerous committee and board meetings and the board members listened to parents. Unfortunately, school districts usually don’t share all the documents with parents that they plan to share with the students when the subject is controversial.

Just recently parents in California fought back against the Gender Unicorn. Hopefully Cave Creek parents will do so before it is ever distributed. But why should parents have to worry about this material in the first place?

Here is another tidbit that arrived in the same email chain from Isaac Akapnitis. 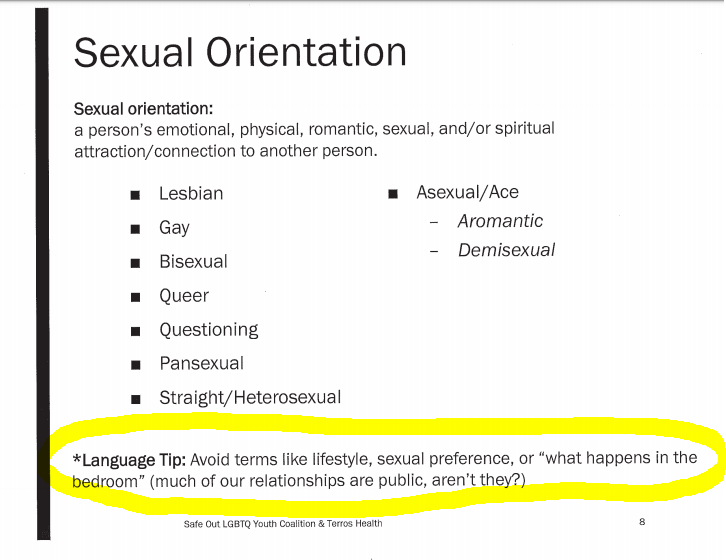 Remember when we were told to accept “gay marriage” because we shouldn’t care what people do in their own bedrooms? Evidently that was just a ploy to nudge us to accept just a little bit more. After all, who wants to appear intolerant? It was never about what happens in the privacy of the bedroom. The secret is out, it is an agenda to grow a base, drive election results, and make money for the powers behind the movement. Cave Creek Unified School District fell for it to the detriment of their own students.

Mr. Akapnitis wasn’t done. Among the many handouts he included to Cave Creek is how they can incorporate the LGBTQ curriculum in every subject throughout the day. Is this the way to teach reading, math skills, factual history and civics, and critical thinking? Does the governing board think this will really put kids in the seats? 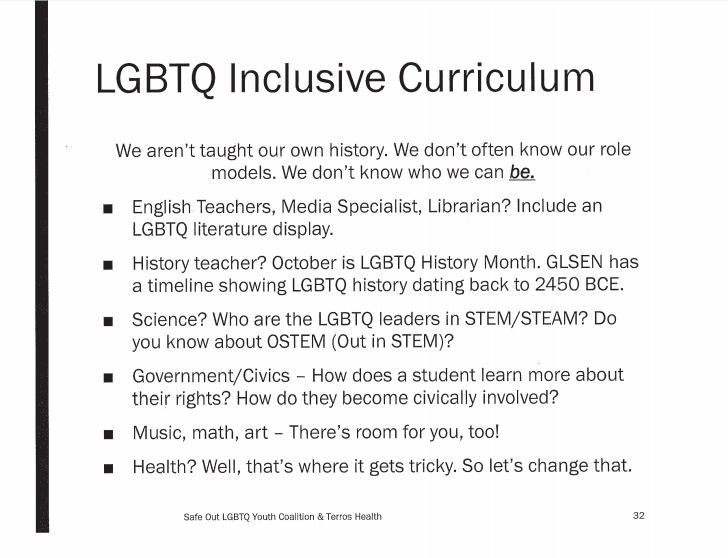 And here is the pot at the end of the rainbow. A small group of students will tell their superiors how to address them. Remember when adults commanded respect and were referred to as Mr. , Mrs., or Miss? Now it is the other way around. Teachers, coaches, and volunteers will be required to respect the changing whims of students or there could be consequences. 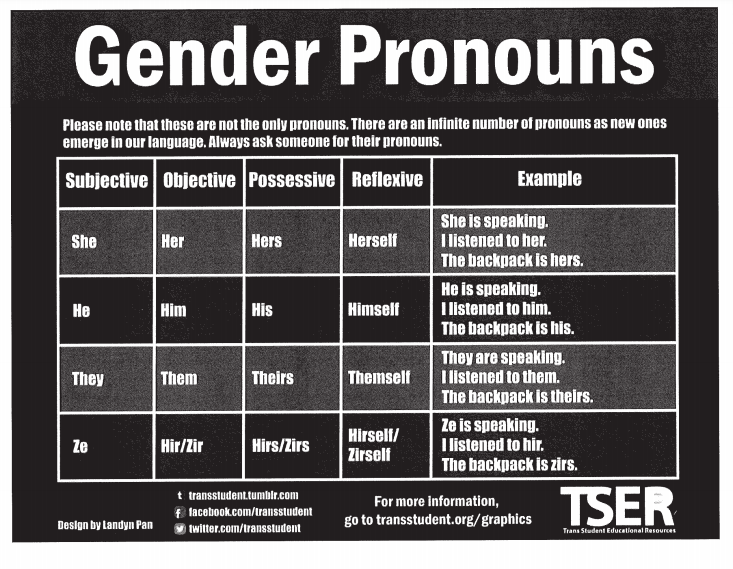 This is what was affirmed by the Cave Creek Governing Board in May. If you live in Cave Creek, do you know who those members are? Do you know when YOUR child will be subjected to this material? The district will tell you we are exaggerating, but they provided the evidence. Isaac Akapnitis and Robert Chevaleau are some of the individuals Cave Creek chose for their team. Unfortunately, taxpayers can no longer trust their public schools like Cave Creek Unified and it is up to school districts themselves to win that trust back. It is a steep hill to climb but the onus to re-establish trust in not on the parents.